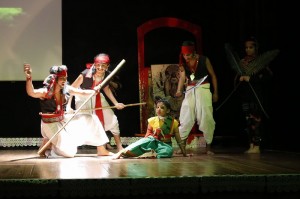 For Niraj Dave’ playing the role of Valmiki was a learning experience. Being a fan of Nobel laureate Rabindranath Tagore, Dave’ easily essayed himself into the role of a dacoit Ratnakar who later reformed to become Rishi Valmiki and went on to write the great Indian epic Ramayana.

“It doesn’t matter about the language because the story itself is so heart-warming. You don’t have to be a Bengali to understand Tagore’s works; they’re for everybody regardless of the language,” said Dave’ who’s born into a Gujarati family.

Nritya Kunj’s Valmiki Pratibha directed and choreographed by Mitali Dev, enthralled the audience and gave them an insight into the Bengali poet’s early works.  The play which was held at Stockport College narrated the story of Ratnakar, a dreaded leader of the bandits who used to indulge in looting, robbery and killing. The second half of the play showed how this bloodthirsty man turns to meditation. During his meditation, he’s tested by Goddess Lakshim (Goddess of wealth) who lures him with promises of gold and riches but he denies her. Pleased with his devotion, Goddess Saraswati (Goddess of Knowledge) blesses the illiterate and ignorant man into a learned and revered sage, Rishi Valmiki.

“It was my desire to direct such a play with boys and girls; a situation occurred when another show where I was planning to take the boys to act as bandits was cancelled. I didn’t want to let them down and at the same time, I wanted to keep their enthusiasm going. This situation instigated me to do this play,” said Mitali, the artistic director of Nrityakunj.

Trained in two of the most demanding classical Indian dance forms – Bharatnatyam and Odissi, the former company dancer of the renowned Sutra Dance Academy in Kuala Lumpur, said: “In the beginning, the children had no clue what exactly they had to do. Most of them had never danced or even performed in a drama. I took one step at a time directing, explaining and translating the meaning of the songs from Bengali to English which was hugely helped by my friend Gopali Ghosh. I made it enjoyable for them during rehearsals by being humorous and friendly and they also responded beautifully by working very hard as evidenced by their great performance on the day. These eight weeks of rehearsals was as if we were all a part of the same family. Also, credit goes to the parents of all the kids for regularly and diligently bringing their kids for rehearsals.”

Tagore wrote Valmiki Pratibha when he was 19, and first performed at Jorashanko, their stately home in Calcutta now Kolkata. He played the role of Ratnakar/ Valmiki and the role of Balika/Saraswati was enacted by the poet’s niece Pratibha.

“It’s for the first time that we organised such a play in the North West of England. And, in this play, we’ve involved the younger generation including the non-Bengali speaking children. Tagore doesn’t belong to the Bengalis only,” said Gopali Chakraborty Ghosh, the narrator of the play.

Gopali who’s also the script-writer of the play explained that when Tagore came to England during his teens, it was in this country that he heard English songs and saw the opera which didn’t exist in India then.

“He took the concept of opera back-home. Valmiki Pratibha thus has the flavour of foreign and native melody,” she said.

Arinjoy Dev, who played as one of the bandits, said: “I’m really proud to be part of this project and I was overwhelmed with joy to see my non-Bengali friends perform with so much of passion and sincerity. Most of them had never been on stage or danced before but now, they’ve all become dancers in their own way.”

“Although the songs in the play were in Bengali but the narration which was in English helped us to enjoy and understand the story,” said James Crooke who had come to watch the play with his wife and friend.

Nrityakunj, an Indian classical dance which ensemble purely for the propagation of Odissi in the UK and Europe, has also been offered to perform the play in Bolton and Nehru Centre, London. 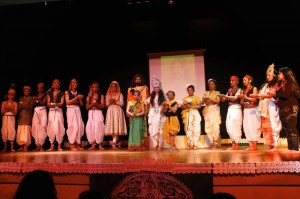