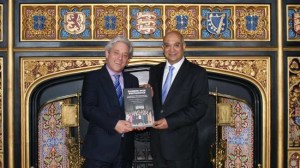 ‘Rainbow over Westminster – A Compendium of Black, Asian and Ethnic Minority Members of Parliament and Peers’ has been launched in Parliament on 13th May 2014. This is the first time that this information on the ethnic diversity among Members of the UK and EU Parliaments has been brought together into a publication of this kind.

The book is comprised of key articles, biographies and extracts from speeches of the Black, Asian and other ethnic minority (BAME) Members of the UK and European Parliaments.

In the preface to the book written by the Prime Minister, Mr Cameron praises the timing of this publication as Westminster has become increasingly diverse, with BAME Parliamentarians no longer a rarity. Between the 2001 and 2010 general elections, there was an increase of 15 MPs of minority ethnic backgrounds.

The introduction from Mr Speaker, the Rt Hon John Bercow MP highlights that since the first Member of Parliament was elected, there have been 38 minority ethnic Members in the House of Commons.

The diversity in Parliament with regards to religion is also highlighted in the introduction of the Lord Speaker, the Rt Hon Baroness D’Souza CMG.

“This publication is an outstanding reminder of how the UK and EU Parliaments have become increasingly diverse in recent decades.

When I joined Parliament 27 years ago the level of diversity was unacceptably low, and now to have 26 Members from minority ethnic groups is a real achievement. Representation at all levels of politics mirrors the brilliantly diverse character of this country to a greater extent than ever before.

However, 18% of the UK population is made up of ethnic minority groups compared to 4.2% of Parliament, and there is still much work still to be done to allow the voices of every background and ethnicity to be heard in Parliament.

I hope that this publication, which showcases the work done by all Black, Asian and ethnic minority MPs, can inspire the next generation. It also stands as a tribute to the minority-ethnic figures that are no longer with us, who fought to reach their positions and used them to make a significant difference to their communities.”