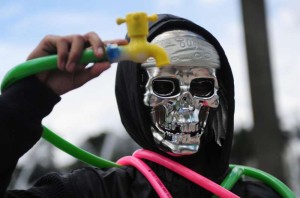 What were they doing in Rotherham? Sleeping? Ignoring the agony whirling around them? How can you explain away 1400 cases of child molestation in a small town with 100 babies born from such sexual predators and enough whistle blowers whose whistles were not heard. Children were hurt and tortured over 10 years, they were raped and beaten, abducted and trafficked to other cities and the town went along with it because… because… because… there is no because. The whole thing is beyond comprehension.

This is not some jungle tribe kidnapping children. This is the UK and a small town where the weekly bingo game is the height of excitement.

The argument: people were afraid of saying anything because they thought they would be seen as racist. Your kid comes home with cigarette marks and you worry about how it looks.

To quote the report.

“The inquiry team found examples of children who had been doused in petrol and threatened with being set alight, threatened with guns, made to witness brutally violent rapes and threatened they would be next if they told anyone”. The report further stated that “one child who was being prepared to give evidence received a text saying the perpetrator had her younger sister and the choice of what happened next was up to her. She withdrew her statements. At least two other families were terrorised by groups of perpetrators, sitting in cars outside the family home, smashing windows, making abusive and threatening phone calls. On some occasions child victims went back to perpetrators in the belief that this was the only way their parents and other children in the family would be safe. In the most extreme cases, no one in the family believed that the authorities could protect them.”

And now we have one of the perpetrators flying off from England to Pakistan and pasting on Facebook that he is having a blast. The clearly sick Umar Razaq – released from jail after appealing the length of his sentence – posted a picture of himself in sunglasses on Facebook as he left the country.

Earlier he had boasted: “Can’t wait… Roll on to the lifetime holiday.”

He added: “Three days and I’m outta this country for a very long time. Feeling happy.”

He also reportedly said they can’t catch him there. What makes you think Pakistan wants a child molester in the country. You be careful mister, they will get you and when they do the world will be a better place.