He told reporters after the first cabinet meeting in this coastal city that major towns in the state will be developed as smart cities. 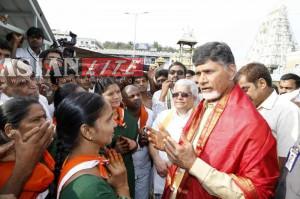 Naidu, who has already hinted that the state capital will be built between Vijayawada and Guntur, said the development of new capital requirs Rs.4 to Rs.5 lakh crore.

The Telugu Desam Party (TDP), a partner in the ruling National Democratic Alliance (NDA) at the centre, will request the central government to extend the special category status to Andhra Pradesh to 15 years. The previous United Progressive Alliance (UPA) government had given this status for five years.

Pointing out that the state has a budget deficit of Rs.15,900 crore, Naidu said it required liberal assistance from the NDA government.

Naidu said many gas-based industries were likely to come to the state. He was confident work on the proposed petrochemical corridor will start soon. The TDP chief hoped that new industries will put the state on the path of development.

Naidu vowed to revive the electricity sector to ensure 24-hour supply to industrial and domestic sectors.