At least 25 people were killed and 145 others wounded in two suicide bombings in the ethnically mixed Iraqi city of Tuz-Khurmato in Salahudin province Monday, a provincial police source said. 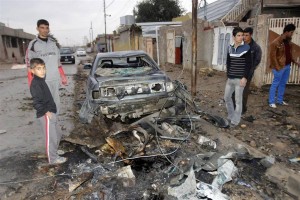 “The latest reports said that 25 people were killed and 145 others wounded by a truck bomb and a car bomb in central city of Tuz-Khurmato,” Xinhua cited the source as saying.

The attacks occurred before noon when a suicide bomber blew up his truck bomb at the entrance of the office of the Patriotic Union of Kurdistan (PUK), led by Iraqi President Jalal Talabani in Tuz-Khurmato, some 90 km east of the provincial capital city of Tikrit, the source said.

Minutes later, a booby-trapped car went off at a crowded parking lot, just 50 metres away from the scene of the first blast, the source added.

Most of the killed and wounded were Kurdish guards and officials of the PUK office, he said, adding that the huge blast of the truck bomb destroyed parts of the PUK office and caused severe damages to the nearby building of the Kurdistan Communist Party.

Mohammed Mahmoud, a Kurdish member of the provincial council, was badly wounded by the truck blast, the source said.

The toll could rise as ambulances, police and civilian vehicles evacuated the casualties to different hospitals and medical centres, while dozens of security men and civilians were removing the debris of the buildings looking for survivors or victims, according to the source.

The attack against the Kurdish party of PUK is the second in the last two days.

On Sunday, a double bomb exploded in the party’s office in Iraq’s eastern province of Diyala, killing 17 people and wounding 65 others, most were PUK officials and Kurdish security members.

The ethnically mixed city of Tuz-Khurmato is part of disputed areas between the Kurds, who want to annex it to their semi-autonomous region, and the Baghdad government.

The Sunni-dominated province of Salahudin with its capital Tikrit, some 170 km north of Baghdad, is the hometown of former president Saddam Hussein.