Yesterday we saw Godzilla. I saw the first one with my dad when I was 7 or 8. So I took my son to watch it along with me to make it on record. The other films in the row are Tower Inferno, Ben-Hur, 10 Commandments and King Kong. 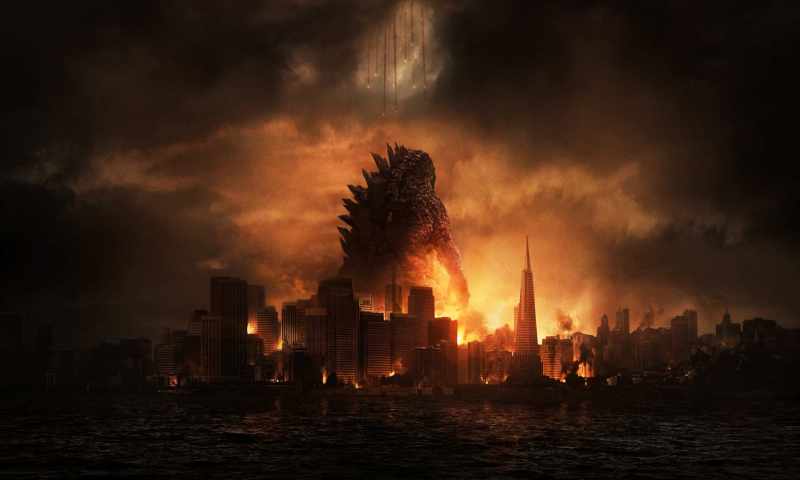 In 1954 Japanese version in black & white shows the creature emerges from his sleep in the deep, disturbed by the bomb that goes off in Hiroshima.  I was so frightened to see the mighty creature smashing everything on the way – sky-crappers, trains and even tanks. Now I know it was a man in Godzilla suite smashed  a miniature Tokyo in a studio set.

The 1998 American film shows Godzilla looking for a nest to breed and the best choice is down town New York. Jeff Goldblum led a team of international scientists to tame the pregnant Godzilla. But I like the version of the creators of Independence Day.

The latest Hollywood version, directed by Britain’s Gareth Edwards, shows him Godzilla as a hero.

He destroys two huge metal grasshoppers that appear out of the earth, called “massive unidentified terrestrial organisms” (Mutos) by scientists.

Sally Hawkins, playing the role as a seismologist, reveals that, 15 years earlier, one of these Mutos tunnelled from the ­Philippines to Japan through “a wormhole.” They started to feed off the country’s nuclear power stations, eventually ­causing a meltdown similar to Fukushima, witnessed by the nuclear mad hatter Joe Brody (Bryan Cranston). The destruction of the power station and the tsunami scenes are marvellous.

Brody has spent the 15 years after the accident trying to find out what caused the catastrophe, which killed his fellow-scientist wife (Juliette Binoche).

The film begins with the arrest of Brody by Japanese police for trespassing a quarantine area. His son Ford (Aaron Taylor-Johnson), a bomb-disposal expert, is summoned from the US to sort him out. The father-son duo begins chasing the Mutos and later Godzilla.

The CG department worked overtime and it is a must watch.