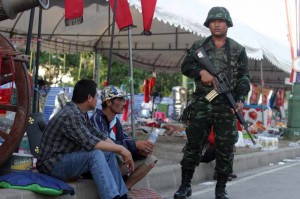 Thailand’s army chief Prayuth Chan-ocha has declared himself as acting prime minister until someone is found to permanently serve the post, media reported Friday.

“As some laws stipulate that ‘the prime minister’ authorises actions under the law, Prayuth Chan-ocha and his assigned individuals will uphold that authority for the time being,” the Bangkok Post quoted a statement of the National Peace and Order Maintaining Council (NPOMC) as saying.

Chan-ocha, who is also the leader of the NPOMC, made the announcement Thursday night.

He will act as the prime minister for administrative purposes.

Chan-ocha Thursday declared a coup in Bangkok and has seized power from the caretaker government in order to prevent tensions.

Following the coup, the NPOMC announced that the country’s constitution was temporarily suspended. The government has been terminated, but the senate and independent agencies will still be able to perform duties.

The NPOMC also ordered educational institutes to be suspended from Friday to Sunday.

Radio and TV stations have been blacked out and are playing only traditional music.

Other communications, including print media, internet and both regular and mobile phones were not affected.

However, it ordered all media, including print and internet, not to interview former government officials, academics, judges or other members of independent organisations “in a way that may create conflict or confusion among the public”.

All government agencies have continued to work normally, foreign relations are not being affected, and movement of weapons have been banned.

It is the 12th military coup in Thailand since the end of absolute monarchy in 1932.

Chan-ocha Tuesday declared martial rule in the country and called on the public not to panic, saying that the military would maintain peace and order and bring the situation back to normal.