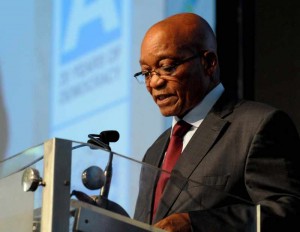 Jacob Zuma was Wednesday elected President of South Africa by members of the National Assembly.

“In terms of Item 6 of part A, Schedule A of the Constitution, I declare the honourable Jacob Zuma duly elected president of the Republic of South Africa,” Chief Justice Mogoeng Mogoeng, who presided over the nomination process, announced, SA News reported.

Mogoeng congratulated Zuma as the house broke into cheers and ululations.

Zuma’s nomination came in for an objection raised by the Democratic Alliance. But the chief justice dismissed the point raised.

With the election, Zuma now ceases to be a member of the National Assembly. His party will later fill that position by choosing the next person on its election list.

Zuma will take the oath of office Saturday at the Nelson Mandela Amphitheatre at the Union Buildings in Pretoria.

Saturday’s presidential inauguration falls well within the constitutional five days the president has to take the oath.

The event will attract thousands of dignitaries, including former heads of state.

Earlier, the chief justice presided over the swearing-in ceremony of the 400 new members of parliament representing 13 political parties.

The first sitting of parliament also saw the election of African National Congress (ANC) chairperson Baleka Mbete as the speaker. She has replaced Max Sisulu.

Mbete was the speaker from 2005 to 2008. She has also served as the country’s deputy president after the recall of Thabo Mbeki in 2008.