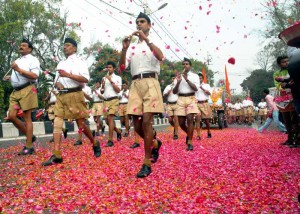 The sudden cancellation by the saffron hotheads of the religious reconversion programmes to welcome the minorities into the Hindu fold suggests that Narendra Modi has finally decided that enough is enough.

However, he may have left it a little too late to ask the Hindutva Gestapo to pipe down. Perhaps he was only giving them a long rope. Perhaps it took time for him to convince the Rashtriya Swayamsevak Sangh (RSS), the head of the Hindu supremacist Sangh Parivar, that the fundamentalists were undermining his development agenda by crossing the Lakshman Rekha. This was the phrase which he used while telling the Bharatiya Janata Party (BJP) MPs to know their limits.

Whatever the reason for the prime minister to take nearly half a year to tell the storm-troopers to back off, he obviously underestimated the damage which the delay would cause to his reputation.

For a start, it showed that he does not have as much control over the party and the Parivar as most people – and perhaps Modi himself – presumed. In Gujarat, he was able to marginalize Vishwa Hindu Parishad (VHP) radicals like the vituperative Pravin Togadiya. But he is clearly finding it difficult to do so at the national level.

The delay in stamping down on the crude display of fundamentalism cannot but induce second thoughts among investors. Their anxiety will be all the greater because the atmosphere has been vitiated by not only previously unknown outfits like the Hindu Yuva Vahini and Dharm Jagran Samiti, which sprouted from nowhere with their provocative Love Jehad and ‘Ghar Wapsi’ (homecoming to Hinduism for minorities) programmes, but by some of the BJP MPs themselves.

Among them, politicians like Yogi Adityanath have built their careers on fomenting hatred against the minorities. It is anybody’s guess, therefore, as to how long they will refrain from crossing the Lakshman Rekha.

It is possible that Modi thought that the radicals will act with restraint if he let the saffronities take relatively innocuous steps like appointing a nonentity as the head of the Indian Council of Historical Research, or introducing Sanskrit in schools to wean the English-speaking “Macaulay’s children” from Western ways, or allowing the external affairs minister call for making the Bhagavad Gita a ‘national scripture’.

But as a former RSS pracharak (preacher), Modi should have known that these are only subsidiary topics for the saffron brotherhood. Their real agenda is to transform India from a secular democracy to a theocratic Hindu rashtra (nation) where the minorities will be second-class citizens.

Modi has now called a halt to such divisive tactics – at least for the time being. But no one can be more aware than him that his diktat will not go down well with the RSS and its militant affiliates. To them, the well-known moderate Atal Bihari Vajpayee was an impediment in their path when he was prime minister.

Now, it is Modi, who is evidently no longer a Hindutva hardliner, having changed into an ace avatar of modernity and progress, to quote Congress MP Shashi Tharoor. The hardliners, or the Hindutva votaries, will, therefore, accept his current directives in a sullen mood.

But what the delay in telling them to behave themselves has done is to take some of the sheen of Modi’s promises, not least because the economic upswing which the middle class expected is yet to take place. As Arun Shourie, a former BJP minister, has said, more is being said than done.

Yet the PM’s chances of pushing ahead have never been greater because he is exceptionally lucky in view of the falling inflation on the economic front and the presence of a dysfunctional Congress and backward-looking leftists in the political field.

If he still appears to be hesitating, the reason perhaps is the paucity of talented people in the BJP’s ranks. Apart from Finance Minister Arun Jaitley and Defence Minister Manohar Parrikar, there does not seem to be anyone among the seniors who has a clear idea of what to do.

On the other hand, Human Resource Development Minister Smriti Irani (of a mushy Saas-Bahu TV serial fame) is proving to be an embarrassment with her four-hour-long consultations with an astrologer (who told her she will become the president one day) and the controversy whether Christmas Day will be a holiday or not.

Of the other ministers, Nitin Gadkari was expected to breathe life into the highways project as the road transport minister in view of the name he earned for the successful highway and flyover schemes, including the Mumbai-Pune expressway, which he initiated as a minister in Maharashtra. But his tiff with the chairman of the National Highways Authority hasn’t shown him in a good light just as his ouster from the BJP president’s post in 2013 following accusations of corruption in his business deals tarnished his reputation.

Modi still enjoys considerable support. If the BJP wins in Delhi early next year, it will be because of him. But the Modi wave is no longer as high as it used to be. The Hindu religious-nationalists have caused the ebb tide to set in.