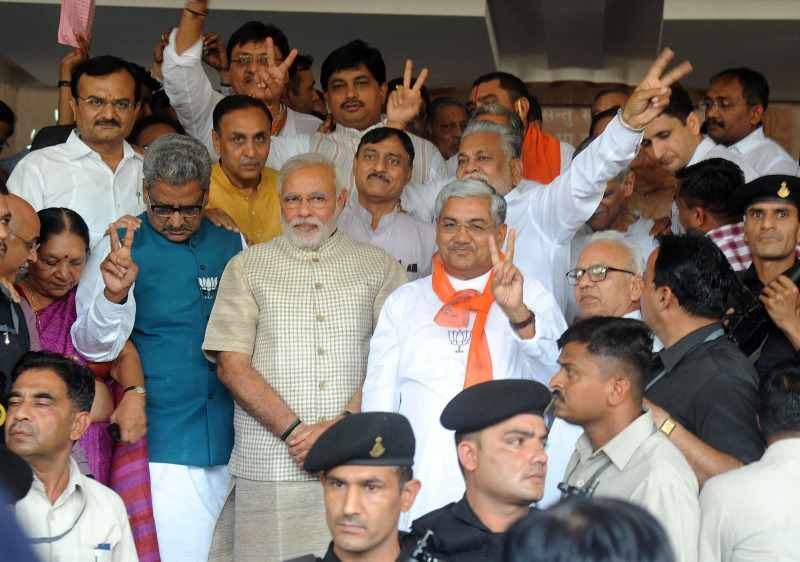 Narendra Modi has proved in letter and spirit what Napoleon Bonaparte said: “Impossible is a word to be found only in the dictionary of fools… Victory belongs to the most persevering.”

The BJP’s prime ministerial candidate has made history. Securing a resounding victory in the latest Indian parliamentary elections, he has proved wrong all the prophets of doom. The absolute majority for his party on its own is a first in 30 years. The larger National Democratic Alliance (NDA), in fact, has crossed the 300-seat mark.

Modi termed this historic win as a victory of people of India and the Indian democracy with an assurance to the 125 million people: “Achchhe Din Aane Wale Hain” — or good times are ahead.

Most political pundits in the country, since 1996, had ruled out the possibility of a single-party majority in any future election, saying the era of coalition governments is going to stay in India for ever.

But the people were determined to give a decisive mandate to a leader who could usher in a new regime of a stable government at the Centre — a pre-requisite for all-round growth and development for an emerging economy like India where one-third of the population is still below the poverty line.

The results are before us. Modi has emerged as a symbol of hope for the youth of this country. People have posed unwavering confidence in his leadership. He will now have to meet their expectations by taking some radical measures to ensure political stability, economic growth and transparency in governance — the three promises he made to the people during his hectic whirlwind campaign throughout the length and breadth of the country in the last more than six months.

The moot question is: What has Modi achieved, and how has he accomplished this near-impossible task?

He swept the entire western belt by bagging some 120 out of the 130 seats in Maharashtra, Goa, Gujarat, Madhya Pradesh and Rajasthan. The people of Gujarat have given a unique gift to their son of the soil by putting all the 26 seats in his kitty — a feat achieved for the first time by any political party since Independence.

Modi himself won by a record margin of over 500,000 votes from Vadodara. All senior BJP leaders from Gujarat, including L.K. Advani, retained their seats. So did Sushma Swaraj from Vidisha in Madhya Pradesh. Rajasthan Chief Minister Vasundhra Raje, who registered a remarkable victory in the assembly elections six months ago, also hit the bull’s eye, scoring 25 out of 25 in her state.

Veteran BJP leader Jaswant Singh, who contested as an Independent after being denied the ticket, lost in Barmer.

Other chief ministers also scored well for the party: Shivraj Singh Chauhan — 27 out of 29 in Madhya Pradesh; Manohar Parikar — two out of two in Goa; and Raman Singh — nine out of 11 in Chhattisgarh. They all made valuable contributions for BJP’s absolute majority and make it the first non-Congress political party to cross the half-way mark since Independence.

It was predicted by many analysts that a Modi wave was sweeping across western India. But no one believed that the BJP-Shiv Sena combine would virtually decimate the Congress-NCP alliance in Maharashtra. Even stalwarts like Home Minister Sushil Kumar Shinde fell — a rude shock to the Congress high command and Maratha strongman Sharad Pawar. The BJP-Shiv Sena-RPI alliance won 42 of the 48 seats, with all the big guns registering convincing victory, notable among them being Nitin Gadkari and Gopinath Munde.

There were conflicting assessments about the BJP in-charge for Uttar Pradesh Amit Shah’s claim that the Modi wave did exist in that part of the country as well, and that the party would win more than 65 seats. Shah’s social engineering and his shrewd planning and untiring ground work in the interiors of the state proved him right. Cutting across caste and religion barriers, BJP has achieved the most resounding victory in the state improving on its tally from 10 in 2009 to a whopping 71.

Top leaders like Modi himself from Varanasi, Rajnath Singh from Lucknow, Murli Manohar Joshi from Kanpur, Varun Gandhi from Sultanpur and his mother Maneka Gandhi from Pilibhit were all re-elected with comfortable margins.

The story is no different in Bihar where reports of a Lalu Yadav-led RJD’s resurgence stopping the Modi-wave proved to be a myth. Bihar Chief Minister Nitish Kumar’s JDU, which was in tatters after breaking its alliance with the BJP in the state, failed to make a mark. This has cast a shadow on Nitish’s political future. The BJP-LJP alliance won 23 of the 40 seats in the state. Even Lok Sabha Speaker Meira Kumar of Congress lost.

In the north, Punjab was the only state where the BJP conceded ground to the Congress. Its senior leader Arun Jaitley lost to the Congress heavy-weight and former chief minister Amarinder Singh. This was more a result of serious anti-incumbency of the Akali-BJP government of Parkash Singh Badal. It is here that Aam Aadmi Party (AAP) of Arvind Kejriwal registered its presence in a big way. The BJP-Akali combine won just six seats in Punjab.

The BJP also made major gains in Delhi, with seven out of seven, Jammu and Kashmir with two seats out of six, Uttarakhand with five out of five, Himachal Pradesh with four out of four. It also secured the lone Chandigarh seat, seven in Haryana out of ten, 12 in Jharkhand of 14 and nine in Chhattisgarh out of 11 — all of them a result of the Modi wave.

The NDA’s performance in the south and the east was along expected lines. The party was expecting to open its account in Kerala but its senior leader O. Rajagopal once again failed to win Thiruvananthapuram by a narrow margin.

AIADMK supremo J. Jayalalitha’s performance in Tamil Nadu is commendable. She has won 38 of the 39 seats in the state and did not allow its arch rival DMK to even open its account. The NDA alliance of BJP, PMK, MDMK and a few other smaller parties too failed to take off in Tamil Nadu.

The last minute entry of TDP into the NDA proved to be a master stroke with N. Chandrababu Naidu making a remarkable comeback in Seemandhra. The TDP-BJP combine won 17 seats in Seemandhra and Telangana regions. The YSR Congress and the TRS, too, did well — all at the cost of the Congress party.

Coming to Odisha, which was considered a potential battle ground for the BJP, Narendra Modi’s vigorous campaign did help the BJP to take its vote share to new heights, though the party could manage only two seats. But the Modi wave has prepared the ground for a rich harvest by the BJP in future.

Similarly in West Bengal — where the BJP’s vote percentage in the 2009 Lok Sabha poll was in single digit, Modi’s concerted campaign has done wonders in terms of generating a Modi wave. Although the party could win only three seats, the BJP has certainly emerged as a formidable alternative to Mamata’s Trinamool Congress in the state with the Left Front almost vanishing from the political scene in the state. The TMC has won more than 30 seats which is a high score by any standard.

Assam results have been encouraging as well, especially because the BJP refused to enter into alliance with any political party. Victory in seven parliamentary seats is a rich harvest by any reckoning. The North-East has gone along predicted lines with regional parties bagging practically all the seats.

The Congress party’s performance, along with its allies, has been dismal throughout the country. Almost all the senior leaders and union cabinet ministers have lost, barring a few.

Same has been the fate of regional parties like the SP, BSP, NC, DMK, JD-U, JD(S) and others. The Left Front, too, has bitten dust in its traditional bastion of West Bengal.

There is no doubt that Narendra Modi has written a new chapter in the 65-year history of Indian parliamentary democracy. The entire world watched with keen interest this peaceful transition. The change through ballot has strengthened people’s faith in democracy. India has emerged on the global map as a vibrant democracy.

Now it is time for Narendra Modi to emerge as a global leader to take India on the path of becoming a super power in every sense of the term. His testing time starts now.