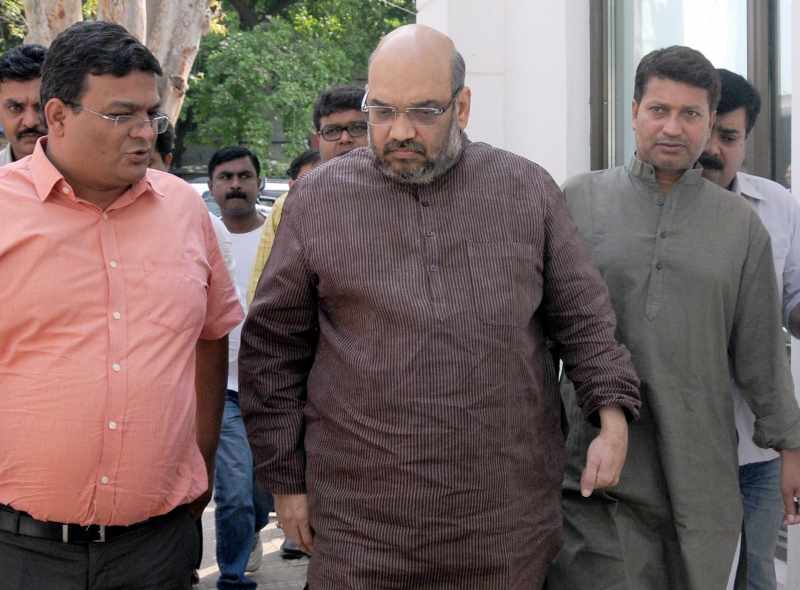 Less than a year ago, when Amit Shah, BJP general secretary and possibly the closest political associate of Narendra Modi, came to Lucknow, the first thing he did was to head for a doctor. An upset stomach and high fever meant the Gujarat strategist hit the Uttar Pradesh campaign trail on a sick note.

Days later, as worried state leaders enquired of him, he exuded confidence and told some senior ones that he had his job cut out – delivering Uttar Pradesh to Narendra Modi, now the prime minister-to-be. Nothing would deter him from doing so. Ten months later, he has emerged as the doctor who not only diagnosed the ailments plaguing the state BJP but also succeeded in treating them.

Shah, a former Gujarat minister of state for home, has not only successfully enlivened a moribund organization but has also shored up enough numbers from the state to ensure that Modi moves from being the Gujarat chief minister to the next occupant of 7, Race Course Road, the prime minister’s official residence in New Delhi. Many attribute his ability to deliver to his innings as an organization man in Gujarat, where he successfully spearheaded campaigns for the state BJP for three successive elections.

Very hard-working and with an amazing intuitive power, Shah is called by state BJP chief Laxmikant Bajpai as a “modern day leader who can connect the dotted lines on the political landscape” and deliver an amazing, tailormade kit to the party. “He understands the polity so well that he has answers to almost every question of the workers and is indeed a master strategist,” Bajpai told IANS. Shah initially went into a huddle with party workers and leaders in the state capital before setting out to small places and districts.

With a singular aim to increase the numbers of the party in the crucial state which sends 80 MPs to the Lok Sabha, Shah knew he had an uphill task as the party had been pushed to the fourth slot in the 2009 polls, with just 10 seats — now it is looking at upward of 70.

Shah not only set loose a team of professionals in Lucknow to collect data, work on a caste matrix and get a lowdown on local problems, but also set the pace for the series of meetings that Modi addressed in Uttar Pradesh since March.

With communal clashes singeing the western parts of the state last September, Shah worked aggressively on the Jat self-pride and weaned them away from Rashtriya Lok Dal (RLD) chief Ajit Singh, who was hitherto the unquestioned king in the Jat hinterland. It was at the insistence of Shah, insiders say, that three BJP legislators, accused of inciting Hindu mobs during the Muzaffarnagar riots were given tickets to contest the Lok Sabha polls. “It was evident that Shah knew that a strong and clear polarization had happened in the region and that without much ado, he would lure the Jats and Gujjars of the area,” a senior BJP leader, once a minister in the state government, told IANS.

Another formidable task for Shah was creasing over serious factionalism in the state unit, which in the absence of power for over a decade in the state and the Centre, had become a party of duds. With a carte blanche from the Rashtriya Swayamsewak Sangh (RSS) and BJP president Rajnath Singh, Shah began to separate the wheat from the chaff.

Success came his way when regional satraps like Surya Pratap Shahi, Om Prakash Singh and a dozen others were sidelined or given tasks which would test their organizational abilities – and in turn expose them. Senior leader Kalraj Mishra was sent to Deoria as a Lok Sabha candidate while Kesarinah Tripathi, a former assembly speaker and a senior leader, was asked to work for the party rather than hope for political rehabilitation. Deliverables were demanded and only those who succeeded in sweating it out found Shah’s favour, a senior leader pointed out.

The result of this careful planning was that the defunct district units were revived and the party succeeded in forming committees for over 80 percent of the booths — the party even reached out to the old-time loyalists.

The idea was to fan out in every nook and corner of the state and spread the hope of “Achchhe din aane waale hain” (Good days will come soon) – something Modi tweeted Friday when it became clear that the BJP was headed for a massive victory.

Shah also understood, like few in the Modi camp, that in Uttar Pradesh, caste still matters. He, therefore, brought on board party veteran Kalyan Singh and crafted an unassailable strategy to counter the influence of the Bahujan Samaj Party and the Samajwadi Party.

This was also a major contributory factor to the 180 degree reversal that the party is now witness to. It was largely his inputs that the party, other than relying on the Modi magic, fielded 25 OBCs, 17 SCs, 16 Brahmins and 14 Rajputs in the state. He was also instrumental in stitching together a last minute alliance with the Apna Dal, a local outfit with a major say in the Kurmi community. This also made things easy for Modi in Varanasi, where he was himself a candidate, and in some other Poorvanchal seats.

Shah craftily exposed the darker side of Azamgarh by terming it a seat of terrorists. Ever since, Samajwadi Party chief Mulayam Singh Yadav, who is contesting from there, has been on a sticky wicket.

Shah’s masterstroke was the rally by Narendra Modi in Congress vice president Rahul Gandhi’s Amethi bastion. Not for nothing has Shah emerged as the BJP’s turnaround man