Her poem  It’s Our World bagged the first prize in under 8 category and runner-up in the overall poetry competition– a part of David Shepherd Wildlife Foundation’s (DSWF) Art for Survival programme. 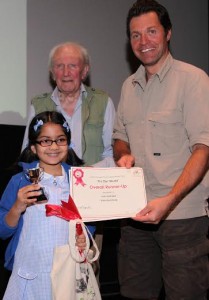 “I feel proud and happy as I put in a lot of hard work in writing the poem. I think I was very lucky too. In future I want to win more awards,” said the seven-year-old whose favourite authors are Roald Dahl and Jacqueline Wison.

Iona, who aspires to become an astronaut when she grows up, was interested in wildlife ever since she was a “little kid”.

“I found a lovely neighbour called Uncle Mike in Birmingham who gave me binoculars, bird watching books and DVDs and also a bird house. He also shared with me a lot about Africa and his collection of videos by David Attenborough and Michael Palin. Later, I watched a movie called 101 Dalmatians and read the book by the same name. My character in the poem Mrs. Posh Ruthless was inspired by Cruella de’ Vil from the book and movie of the same name,” said Iona who loves doing ballet and learning Rabindra Sangeet from her mother.

Although writing comes to her naturally, “However, I had to do a lot of reading and editing before the poem finally took shape,” said the award winner who also dreams of establishing a school for aliens in space so that she can teach them to read and write poems.

The student of Year 3 of Harbinger Primary School in London, Iona’s message to the children is one should be “kind to animals and love nature”.

Winners were chosen from over 2,000 entries received from around the world including Russia, Ukraine, Indonesia, Hong Kong and Africa.

Established in 2004, DSWF encourages young people to express their concern for the environment, and, in particular, the endangered species.

Ostrich feathers on her hat

A coat from leopard skin

On her waist a belt of snakeskin.

Ivory rings dangle from her ears

Real corals around her neck

She clutches onto her crocodile purse

Sheep fur boots on her legs

Carrying the world and its continents

And happily dresses to kill.

Her ignorance and vanity

Every living creature belongs to this world

For the present and the next

So learn to value Mrs. Posh

Or it will be too late