If Duke Orsino, one of the characters in William Shakespeare’s play ‘Twelfth Night’ felt ‘If music be the food of love, play on…….’, then for Rakesh Joshi, pure music is an easy medium to connect to human spirituality and the Supreme Power.

Based in Ashton-U-Lyne, Joshi who teaches Indian music and Hindustani vocal at Bharatiya Vidya Bhavan, Manchester, said: “Music is for everybody, anybody can sing if they have the right training.” 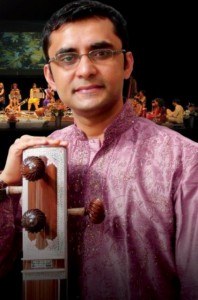 Being born and brought up in Vallabh Vidyanagar, India, the UK-based musician started learning music at the age of 6. Initially, his parents, Dr Anilchandra and Dr. Hemlata Joshi, trained him in music before taking a formal training under the tutelage of Late Dinesh Majumdar, Mr. Brij Joshi, Mr Shashank Fadnis and Ajoy Chakrabarty for voice culture and vocal training.

A former radio broadcaster at Asian Radio station in Manchester strongly believes that Indian music has a great scope for amalgamation and collaboration of other forms of music and style.

An alumnus of Sardar Patel University, Joshi said, “In Manchester, children are very keen to learn Indian music and Hindustani vocal; students who come from non-Asian background too are very passionate about Indian music.” Apart from teaching Hindustani vocal, harmonium and keyboard, he also works with several schools and colleges to deliver talks and workshops on Indian music.

Joshi who’s also specialised in composing Indian classical and contemporary music ensemble/ orchestra, has performed across the UK, the US, Europe and India.

“Since 2001, the musicians of Raga Jyoti have been presenting many national music projects and concerts at reputed venues across the UK. Also, they’ve performed music composition for late Pandit Ravi Shankar,” said the artistic director of Raga Jyoti.

His musical talent doesn’t stop here. Come November, Joshi will be presenting ‘Bharatiya Vrund Gaan’– a newly formed Indian Choir of 50 singers. “We have Western choir but there isn’t any big Indian body of singers who perform as a group in the UK and especially in North England. When this thought started pricking me, I came up with an idea of forming the Indian choir,” said Joshi who also performs Indian classical raga on the Grand Piano.