The journey from Bihar to Britain has been a “very” long one but her grit, determination and self-belief has proved that nothing is impossible. 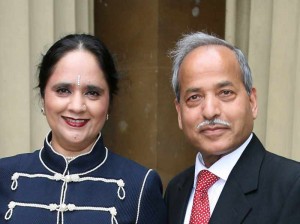 Mrs Asha Khemka, who was recently honoured with the Dame Commander of the Order of the British Empire by her Majesty, the Queen Elizabeth II, says, “Britain has given me a life-enhancing opportunity. Britain recognised my talent and hard-work. I am indebted to this land and the society.”

The accolade comes five years after she was awarded an OBE for services to education.

Speaking to Asian Lite, Mrs Khemka, a leading educationalist and the first Indian -born for 83 years to be awarded the DBE, said: “It’s all about self-confidence and your upbringing.”

She said, “Further Education has been my life. I believe passionately in the power of Further Education to transform lives – it has mine and it does so for countless others. To receive such a recognition is deeply humbling.”

Mrs Khemka’s journey is truly inspirational. Through her dedication and determination, she has enjoyed a meteoric rise through the ranks of Further Education progressing from mature student to principal. She is widely-regarded as a leading figure in the world of education and skills.

Born in a traditional Marwari upper-class family in Bihar’s Sitamarhi, where girls get married at an early age, Mrs Khemka also got married at the age of 15. She came to the UK in 1978 with husband Mr Shankar, a consultant orthopaedic surgeon, and three young children; daughter Shalini, and sons Sheel and Sneh. She was a full time house wife for 20 years. Mrs Khemka had limited formal education, little understanding of the English language and British culture when she first arrived.

“As a young mother, it was a total shock for me when I first landed in the UK. And, it was in this country that I saw snowfall for the first time in my life. I used to regularly slip on the ice wearing saris and dropping my children to school,

“Initially, speaking English was a challenge but not difficult. I learnt English watching children’s programme and interacting with the mothers of my children’s friends,” said Mrs Khemka, who’s the principal and chief executive of West Nottinghamshire College.

A career spanning 25 years, Mrs Khemka has worked as a part-time lecturer, curriculum lead, head of quality and deputy principal. She took over the reins as Principal and Chief Executive of West Nottinghamshire College in May 2006.

Asked whether she felt out of place and uncomfortable when she first arrived in the UK, Mrs Khemka said, “I didn’t feel uncomfortable at all. I presented myself as I am; I didn’t change myself. When you stick to yourself, people will accept and embrace you.

“At the end of the day, it’s all about your self-belief, confidence and grooming yourself so that people will take you seriously.”

If a woman is behind the success of a man, then for Mrs Khemka, her husband Mr Shankar and their children were her pillars of support. She said, “I married to a man who was traditional but the same man gave me so much of support and space that today, he’s my biggest admirer and a critic. My children are my inspiration. I won’t have been able to reach this position without them.”

Mrs Khemka who’s also making an impact on the international stage, is also the founding chair of the Association of Colleges in India– an organisation aimed at progressing links between educational institutions in the UK and in India. It has 33 colleges of the UK under its umbrella.

“We work with private and government agencies in India to enhance leadership, curricular planning and quality assurance. By 2020-25, nearly 25% of the global workforce will come from India, and the country doesn’t have the infrastructure to tap the resources, therefore, it is a global responsibility to do the needful”, said Mrs Khemka for whom family and work go parallel to each other.

Her mantra to success is “be focussed and pro-active, and prove 100 per cent better than the rest”.

Asian News from UK
Leading Newspaper for Politics, Business & Economy
Profile
We use cookies on our website to give you the most relevant experience by remembering your preferences and repeat visits. By clicking “ACCEPT ALL”, you consent to the use of ALL the cookies. However, you may visit "Cookie Settings" to provide a controlled consent.
Cookie SettingsREJECT ALLACCEPT ALL
Manage consent