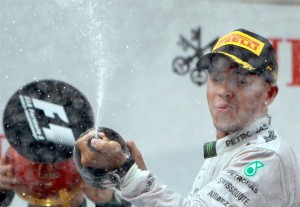 Lewis Hamilton and Nico Rosberg waged a tremendous battle for pole position in Barcelona on Saturday, with the honours finally going to the Englishman for the fourth time this year after both Mercedes drivers had turns at the top.

With his fourth successive win, Hamilton went to the top of the drivers’ championship for the first time this season with 100 points.

For Force India, Mexican Perez earned two points while his teammate got the last point from the fifth race of the season with the team getting three points in total.

Therefore, Force India dropped a place to fourth in the constructors’ standings and are currently there with 57. Meanwhile in the drivers’ standings, German Hulkenberg is sixth with 37 while Perez sits on 10th with 20.