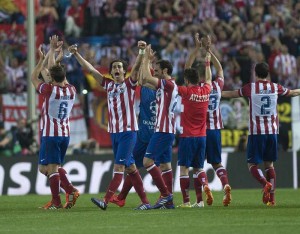 Atletico Madrid won the Spanish league Saturday after 18 years as a result of a 1-1 draw against Barcelona.

The match, which was played at the stadium of Camp Nou in the Mediterranean city of Barcelona, created a great expectancy.

The game was very intense and both teams fought hard, especially Atletico, after two of its best players — Diego Costa and Turan — got injured in the first 20 minutes.

Barcelona’s player Alexis scored a goal in the first half of the match which could have made Barcelona win the title after a draw in the first leg.

However, in the second part, Atletico’s Godin scored a goal after 48 minutes of match, giving the victory to Atletico.

Atletico’s coach Diego Simeone said, “It is terrific, there are no other words. Fighting, competing, with humility, against everything. I knew the players would keep their heads, I know them.”

“It is tremendous, a feeling of joy that cannot be explained,” he added.