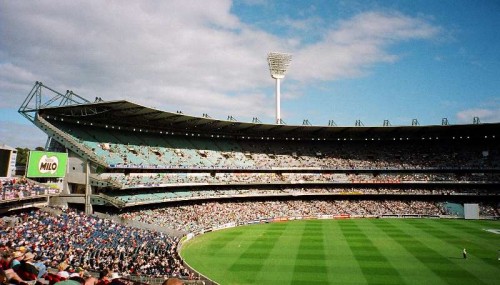 India produced a much-improved bowling performance to snare seven second innings wickets but Australia’s lead climbed to a considerable 326 runs after reaching 261 for seven on the fourth day to keep the match tantalisingly poised after another intriguing battle in the third Test at the Melbourne Cricket Ground (MCG) here.

Shaun Marsh’s (batting 62) battling knock helped Australia cross the psychological barrier of 300 runs. Ryan Harris (batting 8) was at the crease with him at close of play.

Australia were 90 for one at lunch, with an overall lead of 155 and were seemingly in control but the post-lunch session ended, whose commencement was delayed for an hour and 25 minutes by rain, saw India dismiss Shane Watson (17), in-form skipper Steven Smith (14) and the well-set opener Chris Rogers (69) to effect a fightback.

Indian pacers visibly learnt from their unjustified ploy of bouncing batsmen in the first-innings and pitched the ball a lot fuller to get purchase off the wicket, collectively excelling to give them a fighting chance.

Quicks Ishant Sharma, Umesh Yadav and spinner Ravichandran Ashwin took two wickets each. Mohammed Shami picked up the other wicket to fall to halt Australia’s march who went into tea at 174 for four, ahead by 239 runs.

Ishant led India’s charge after tea. Bowling at a probing line with good pace, he was able reverse swing the ball to trouble the batsmen, who struggled for runs.

He was rewarded when Joe Burns (9) edged an away-going delivery to Dhoni. His efforts inspired Yadav to bend his back and he got purchase from the wicket to claim Brad Haddin.

India’s push for late wickets to swing the momentum entirely in their favour was briefly resisted by the Marsh-Johnson but the left-arm pacer fell at the fag end of the action to raise India’s hopes.

Earlier, Australia made a confident start to their second innings, reaching 90 for one at lunch, after restricting India to 465.

Rogers and opening partner David Warner (40) made a brisk start.

But their efforts were undone by wayward bowling coupled with some aggressive batting by the Australian openers, particularly David Warner who creamed six boundaries during his entertaining innings.

The Indian pacers needlessly bowled short to make it easier for Warner to score as he cut and pulled at every given opportunity.

He gave Australia a flying start, with the hosts racing to 57 runs in 14 overs.

The signs were ominous for India and it seemed Warner would take the game away from them but Ashwin halted their acceleration, dismissing Warner leg before wicket.

These events occurred after India were bowled out for 465 runs in their first innings, conceding a lead of 65 runs.

Resuming at the overnight score of 462 for eight, India lost Yadav (0) in the second ball of the day for zero and then Mohammed Shami (12) shortly after.

Both wickets were taken by Mitchell Johnson to finish his innings tally at three wickets for 135 runs. Australia made 530 in their first innings.