A Neymar double and a brilliant performance from Oscar helped Brazil beat Croatia 3-1 in Group A and get their FIFA World Cup campaign off to a winning start at the Arena de Sao Paulo here Thursday. 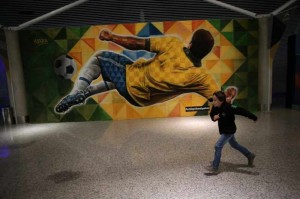 Brazil’s poster boy might have sent the shutterbugs into a tizzy after his two goals but the real hero for the hosts was Chelsea midfielder Oscar.

He assisted Neymar for his first goal in the 29th minute and played in the cross that led to the foul on Fred, giving Brazil a dubious penalty, which Neymar converted in the 71st minute.

Oscar capped off a match winning performance by toe-poking in the ball from outside the box in the 90th minute after a twisting and turning solo run.

But Oscar’s real contribution was in the midfield where he bossed the game. The diminutive midfielder won some crucial tackles and was the main supply route for all the attacking Brazil did.

Neymar, on his debut in the World Cup, showed why he is rated as one of the biggest talents in world football today. The Barcelona attacker had four shots on goal out of which two he converted. His memerising trickery in and around theA

Croatia box had the defenders scrambling.

But it wasn’t all rosy for the hosts as their susceptibility at the back was there for all to see. Attacking teams like Spain, Germany and Argentina would be licking their lips at the prospect of going up against this Brazil back four.

Luis Felipe Scolari’s men were put under immense pressure in the latter part of the first half and if not for the ghost penalty they were awarded, things could have turned out to be a lot worse.

Earlier, as expected Brazil did score the first goal of the 2014 FIFA World Cup but unfortunately for the hosts it was an own goal by defender Marcelo.

A shell-shocked Marcelo trying to defend Olic’s low cross deflected the ball into his own net in the 11th minute.

It was Brazil’s first own goal in 94 World Cup finals matches.

After going down, the Brazilians clawed their way back and held most of the possession. They finally got the breakthrough thanks to Oscar’s tenacity.

Having already shielded the ball while on the ground he managed to retrieve possession after being dispossessed, scrap his way past a pair of Croatian challenges and squeeze the ball through to Neymar who picked his spot — in off the post — from 20 yards out.

Brazil were very fortunate to take the lead. Fred controlled Oscar’s cross in from the right, and the big striker, with his back to goal, fell under the slightest touch from Dejan Lovren.

That goal changed the complexion of the match as Croatia attacked the Brazil goal with great fervour.

Brazil escaped a couple of late scares, including a goal harshly disallowed for a foul on Julio Cesar. With three minutes remaining Scolari sent on Ramires, for the goalscorer Neymar.

And the impact was immediate as the Chelsea midfielder won the ball in midfield which his club-mate, Oscar, picked up and his early taken shot beat the Croatian goalie.

Brazil next take on Mexico Tuesday