Colombia outclassed Greece 3-0 with goals from Pablo Armero, Teofilo Gutierrez and James Rodriguez in the Group C opener of the FIFA World Cup at the Estadio Mineirao here Saturday. 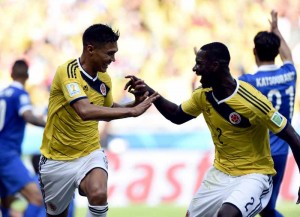 The Greeks continued their streak of not winning their opening game in World Cup finals while Colombia stretched their unbeaten streak to eight games.

Defender Armero opened the scoring in the fifth minute while Gutierrez poked in a corner to double Colombia’s lead. Rising Monaco star Rodriguez rounded off the scoring with a precise left foot shot from inside the box in the 92nd minute.

Greece, though, with 54 percent held more possession and had more shots (12) on goal but failed to find the back of the net.

Meanwhile, Colombia were the more adventurous of the two and constantly made inroads into the opposition box. Greece took potshots from outside the D with Colombia goalkeeper making comfortable saves.

Greek striker Georgios Samaras hardly saw the ball such was the unconvincing performance.

The Greeks did launch a late comeback but luck was not on their side as Fanis Gekas’s free header cannoned off the post denying his team their first goal of the tournament.

Colombia’s win made it three wins from three matches for South American teams after Brazil and Chile were victorious in their opening matches.

Colombia were a little unfortunate with Armero’s opener as it deflected in, but Greece were caught dozing when Gutierrez scored the second and had nothing left when Rodriguez rounded off the victory in stoppage time.