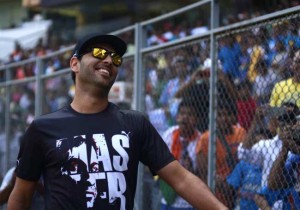 Royal Challengers Bangalore earned themselves a reprieve with a 16- run win over Delhi Daredevils for only their fourth success in 10 matches of the IPL, here Tuesday after rain delayed the start by an hour.

Courtesy a fiery 29-ball 68 not out (1×4, 9×6) by born-again Yuvraj Singh, RCB piled up 186 for four and then survived a strong challenge from the Delhi batsmen before restrict the visitors to 170 for 7.

RCB moved to eight points to get back into the middle of the eight-team league table while Delhi remained at the bottom with eight defeats from 10 games, their only two wins coming in the UAE-leg of the tournament last month.

Facing a mammoth target, Delhi, whose batsmen have struggled all through this season, were never in the hunt despite some big hitting by Mayank Agarwal (31) and skipper Kevin Pietersen (33), but neither stayed long enough to trouble RCB.

It was eventually left to Jean-Paul Duminy (48, 30b, 3×4, 3×6) to put up a strong fight, but his dismissal in the 18th over, bowled by Mitchell Starc, effectively sealed the issue despite some bold strokes by Kedar Jadhav (37) at the tail end of the innings.

Doing the bulk of damage for RCB was veteran off-spinner Muttiah Muralitharan who got rid of Murali Vijay (1) and Dinesh Karthik (1) while seamer Mitchell Starc matched the Sri Lankan with two wickets.

Earlier, skipper Pietersen could barely hide his embarrassment as his bowlers leaked runs, especially in the end-overs. So much so that Yuvraj and Rana plundered some 71 runs in the last four overs.

Imran Tahir was creamed for 21 runs, Mohd Shami was hit for 14, Siddarth Kaul conceded nine before Rahul Shukla, bowling the final over, became a nervous wreck with Yuvraj smashing him for 27, including four sixes.

Thus, all the good work done earlier was dismantled in quick time as Yuvraj, reveling in his new-found confidence, supreme touch and timing, spared no bowler, spinner or seamer.

Such was Yuvraj’s dominance that the Delhi attack was made to look pedestrian, which it was for much of the innings.

Prior to Yuvraj’s pyrotechnics, RCB struggled to accelerate with their top order, comprising openers Chris Gayle (22) and Parthiv Patel (29) and Virat Kohli (10), again failing to build on good starts.

RCB’s most consistent batsman, AB de Villiers (33) sparkled briefly before leaving the stage for the Yuvraj show that sent the massive crowd into a delirium.