Holders Spain were humiliated 1-5 by the Netherlands in the first match of Group B in the 2014 FIFA World Cup at the Arena Fonte Nova here Friday. 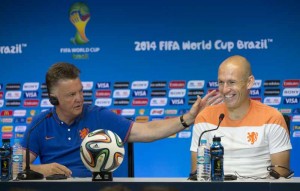 In a repeat of the 2010 South Africa finals, Spain failed to contain the Dutch counter attack play and were decimated in the second half.

It was a Robin van Persie and Arjen Robben show after that. Van Persie equalised in the 44th minute with a brilliant diving header while Robben’s mesmerising skills helped him give the Dutch the lead in the 53rd minute.

Van Persie made it 3-1 in the 72nd minute and Robben grabbed his brace in the 80th minute.

Stefan de Vrij also got his name on the scoresheet in the 65th minute, bundling in a corner.

Two goals each from Arjen Robben and Robin van Persie helped the Netherlands notch a stunning 5-1 victory against defending champions Spain in the Group B opener here Friday.

In what was a rematch of the 2010 World Cup final in South Africa, Xabi Alonso’s penalty kick helped Spain break the deadlock in the 27th minute after Dutch defender Stefan de Vrij brought down Spain forward Diego Costa, reports Xinhua.

The defending champions could have doubled the lead in the 42nd minute but David Silva’s close-range chip shot failed to curl past Cillessen.

After the two sides were tied at 1-1 in the first half, the match resumed in heavy rain.

This time, the Dutch managed to find early opportunities. In the 53rd minute Robben met a long pass in the area, he flicked the ball past Gerard Pique and curled in with his left foot.

With one goal in hand, the Netherlands tuned comfortably for counter-attacking style and controlled the rest of the match.

Van Persie’s bullet-like right-foot lash hit the woodwork in the 61st minutes but the Dutch did not need to wait long for their next goal.

Defender Vrij managed to make up for the mistake he made in the first half as he bundled in Sneijder’s in-swing free-kick in the far post to make it 3-1.

Van Persie dispossessed the ball from Casillas and tapped in the open goal in the 72nd minute while Robben surged in another solo run in the 80th minute and flicked Ramos and rounded Casillas before making it 5-1.

The Netherlands still had several chances in the final minutes but the 5-1 score line is good enough for the Dutch to taste the sweet revenge of the final loss in South Africa four years ago, when Spain won 1-0 after extra time to lift the trophy for the first time in history.