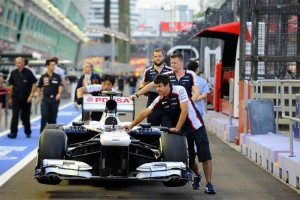 Formula 1 drivers are going ‘back to school’, so to say, to relearn driving skills thanks to new racing rules and changing technology.

The adoption of hybrid drive trains and aerodynamic changes have led to cars with less down-force, less grip and a whole lot more torque – making them trickier to drive.

This requires drivers to use far more finesse through turns, while brake-by-wire technology and new limits on how much fuel cars can burn has left them rethinking such basic skills as where to brake and how soon to get on the gas.

“It is all new for the drivers this year,” Christian Horner, team principal at Red Bull Racing, was quoted as saying.

The biggest change this season has been the adoption of 1.6-litre turbocharged V6 engines with sophisticated hybrid drive trains.

Aerodynamic changes – most notably, narrower front wings and the elimination of one rear wing – have reduced the amount of downforce the cars generate.

“It’s quite a lot easier to get wheelspin and break traction out of a corner,” Red Bull driver Daniel Ricciardo, who is currently ranked sixth in the championship, was quoted as saying in wired.com.

Managing the throttle and having more finesse in that area has been the biggest challenge, he added.