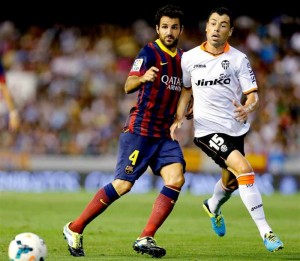 “Barcelona and Chelsea have reached an agreement for the sale of Cesc Fabregas to the English club,” the Spanish club said in a statement.Fabregas, 27, previously played for Arsenal before joining Barcelona in August 2011.Fabregas is currently with the Spanish team in Brazil for the FIFA World Cup.

Although admitting it would be a huge loss for Barcelona as Cesc Fabregas joins Chelsea, Barca midfielder Xavi still wished his teammate all the best for the future.

“Yes it is great news for Cesc. I think he is very happy. He looks very happy. It is a great opportunity for him to be signed by a very good team. I think he was hopeful that would happen,” said Xavi in a pre-match news conference here Thursday, reports Xinhua.

“Of course it is very huge loss for Barcelona but he has decided on his future. As a friend I would like to wish him all the best.”

Barcelona has agreed to sell Fabregas to Chelsea for a reported 30 million pounds Thursday, one day before Spain take on the Netherlands in the 2014 World Cup Group B opener here.

But Spain’s head coach Vicente del Bosque believes the transfer will have no interference in the team’s preparation.

“There will be no interference whatsoever in the spirit of the squad. Players change their clubs. These are decisions that are always taken over the summer. But this will not affect us at all,” said Bosque.

Fabregas, 27, previously played for Arsenal before joining Barcelona in 2011. He is currently with the Spanish team in Brazil for the World Cup.