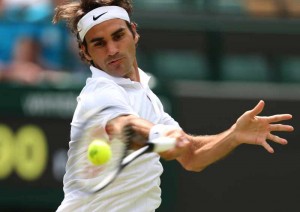 Monfils held two match points in the fourth set, but Federer Thursday managed to save both, finally taking the victory in three hours and 20 minutes, reports Xinhua.

“I still thought the finish line was far for Gael. I knew I could play better tennis. I got off to a good start, so I was actually feeling alright, but then when I was down two match points, that’s when I wasn’t feeling so great anymore,” said Federer after the match.

“I thought, ‘This is it. This is last point, man. Just go down fighting, don’t miss an easy shot and let him have it. It’s fine.'”

It is the ninth time Federer has reached the US Open last four. He has great memories at Flushing Meadows, winning five straight titles, but has failed to reach the semi-final since 2011.

“I think my game got better as the match went on,” said Federer.

“I was able to play throughout at a high level physically and mentally. Mentally I’m not ever going to go away, but physically I was right there. I felt I had more chances throughout the fourth than he did, so it would have been an unbelievable letdown for me to get broken at 5-4 and lose a match like that. It would have been not very cool, I must say.”

“He’s a great guy. We had a tough, tough match in Toronto. I think I needed nine match points to close him out and beat him at midnight, 6-4 in the third, so we know what to expect.”