England captain Steven Gerrard is confident that England can still progress to the World Cup knockout phase despite a 2-1 loss to Italy here. 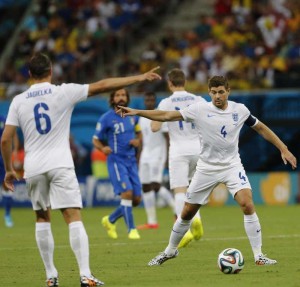 Mario Balotelli scored the winner for the Azzurri after Daniel Sturridge had cancelled out Claudio Marchisio’s opener at the Arena Amazonia stadium, Xinhua reported Sunday.

But Gerrard insists the team can survive beyond the group stage in Brazil.

“We’ve got to play two good games now,” the Liverpool midfielder said. “The first plan was to get out of the group and we’re under pressure now because we’ve lost the first game. But if we play like we did tonight we can get six points and come out of this group.”

England manager Roy Hodgson will take plenty of positives from the match, particularly the second half when England repeatedly pressed forward in search of an equaliser.

Despite fading in and out of the match from the left flank, Wayne Rooney was involved in many of England’s best attacking moves.

Meanwhile Raheem Sterling and Danny Welbeck provided plenty of problems for Italy’s defence, particularly in the first half hour.

Perhaps most importantly, all showed they were able to play alongside Sturridge, whose prolific form has now made him Roy Hodgson’s undisputed first choice central striker.

Gerrard vowed the team would continue its attacking mindset in the next match against Uruguay in Sao Paulo June 19.

“No one is happy right now, but we’re certainly upbeat about how we played, how brave we were and what we created,” Gerrard said.

“There were a lot of positives but at the end of the day we’ve lost the game. We need to look at where we made mistakes tonight and put it right for the next game.”

Gerrard expects his Liverpool teammate Luis Suarez to play some part in the match at the Itaquerao stadium. The striker has been recovering from keyhole knee surgery and missed Uruguay’s shock 3-1 defeat to Costa Rica Saturday.

“I’m not sure where Suarez is at injury-wise but I expect him to play some part. They’ve got really good firepower up front but we’ve seen that they are beatable. They concede goals and if we attack like we did tonight against Uruguay we will cause them big problems.”