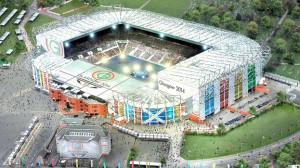 India’s woman power was to the fore on the opening day of the Commonwealth Games here Thursday when the gritty weightlifters accounted for a gold and silver and female judokas added another silver and a bronze to make it a day to remember.

Then there was a bureaucratic goof-up to dim the sheen of the metal when it was revealed that a para powerlifter was sent back home after he failed an out-of-competition drug test last month. The result was conveyed to him here and he quietly left Glasgow.

With one gold, three silver and a bronze, India are now fourth in the medals tally behind England, Australia and hosts Scotland.

India put their name in the medal board for the current games with Manipuri girls Sanjita Khumukcham and Mirabai Chanu Saikhom winning the gold and silver, respectively, in the women’s 48kg category of weightlifting competitions at the Clyde Auditorium. Sanjita had a total lift of 173 kg while Mirabai managed a haul of 170kg.

Judoka Shushila Likmabam brought more cheers by bagging a silver in the final of the women’s -48kg category. She lost to Kimberley Renicks, who took the first gold for hosts Scotland.

Judoka Navjot Chana then finished second to England’s Ashley McKenzie by losing the final bout of the men’s 60kg category at the Scottish Exhibition and Conference Centre (SECC).

Kalpana Thoudam won the bronze in the women’s -52kg category as she beat Christianne Legentil of Mauritius. Christianne picked up three penalties while Thoudam had two.

But for the Asian powerhouse, the double delight from the weightlifting arena provided the biggest success.

In snatch, the 20-year-old Sanjita had three good lifts in her three attempts of 72kg, 75kg and 77kg. She survived a scare in her first attempt, 92kg, in the clean and jerk when she failed to lift the weight and the bar almost missed her shin bone. But in her next two attempts she lifted 92kg and 96kg with ease.

Mirabai lifted 72kg in her first attempt in the snatch but then failed in her next attempt for 75kg. The 19-year-old, however, succeeded in lifting 75kg in her third attempt which was a good lift. She had two good lifts of 92kg and 95kg in the clean and jerk but failed in her last attempt for 98kg.

Sanjita’s eyes turned moist as the tricolour was hoisted and the national anthem played out for the first time in the Games.

Chana, who is employed with Punjab Police, beat South African Daniel Le Grange in the semi-finals while Shushila got the better of Australian Chloe Rayner in the semi-final of the women’s 48kg category.

However, it was the end of road for Manjeet Nandal, who lost his men’s 66kg quarter-final bout to English Colin Oates. Meerut girl Shivani lost her round of 16 match in the 57kg category as she picked up three consecutive shidos against Canada’s Jessica Kimklait.

Indian shuttlers also started their campaign thrashing Ghana 5-0 in Group B of the mixed team event at the Emirates Arena. They next face Uganda later in the day.

In squash, Joshna Chinappa made it to the Round of 16 in the women’s category while her compatriots Anaka Alankamony and Mahesh Mangaonkar lost their matches in the Round of 32.

But landing the country into disrepute, para-powerlifter Sachin Choudhary had to be pulled out of the Games and sent back home for failing a drug test conducted by the National Anti-Doping Agency (NADA) last month.

Choudhary quietly left Glasgow for India citing his father’s ill-health even as his doping report was made public. He was tested out of competition.

PCI secretary general J. Chandrasekhar told IANS that Choudhary has indeed failed a dope test and the national body was seriously taking up the issue.

“We have got the news that Sachin has tested positive in an out-of-competition dope test conducted by the National Anti-Doping Agency. We are seriously taking up the matter and will take strict action against him,” he said.

The Indian women’s hockey team also started their campaign on a winning note beating Canada 4-2. India will next take on New Zealand July 27 at the Glasgow National Hockey Centre.

In table tennis, the women’s team won their group games against Barbados and Nigeria while the men’s team beat Vanuatu comprehensively in their group match.