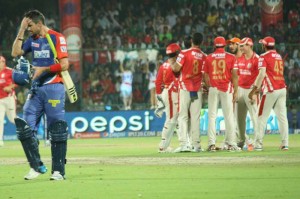 Kings XI Punjab consolidated their position at the top of the Indian Premier League (IPL) standings with a four-wicket win over bottom-placed Delhi Daredevils at the Ferozeshah Kotla here Monday.

Delhi’s dismal run of not winning since their return to India from UAE, continued.

The latest loss was their seventh straight defeat with their only wins coming April 19 – their second match – and April 27 at Sharjah.

After restricting Delhi to 164 for seven, Punjab scored 165 for six in 19.4 overs with Manan Vohra and Akshar Patel top scoring with 42 runs each.

Virender Sehwag (23) and Manan Vohra gave Delhi a blistering start, taking them to 67 after six overs.

After a hitting a six off J.P. Duminy, Sehwag tried another ambitious loft over extra cover but was caught on the boundary, giving Delhi their second success.

Glenn Maxwell (14) threatened for a while but failed to pick Imran Tahir’s googly and was castled by the South African spinner.

David Miller (2), another Kings XI strongman, fell early to put some doubt in the Punjab camp.

Wriddhiman Saha (13) and Patel stemmed the flow of wickets and brought some normalcy to the innings.

Their 33-run partnership was crucial for the team’s cause and took Kings XI closer to victory.

Patel was the key in the end and kept a cool head to steer Punjab to victory with two balls to spare.

Karthik (69) and skipper Pietersen (49) strung together a 71-run partnership off just 48 balls for the second wicket after Murali Vijay (5) fell early.

However, barring the two, Delhi batsmen found the going tough.

Duminy (17) and Kedar Jadhav (0), who have done so well for the Daredevils this season, failed to make a mark, putting further pressure on Karthik.

Delhi had a disastrous end to their innings, losing five wickets in the final four overs and scoring just 35 runs

Young pacer Sandeep Sharma, who has been in fine form, once again bowled in good areas, picking up three wickets and took his tally to 17 in the tournament.