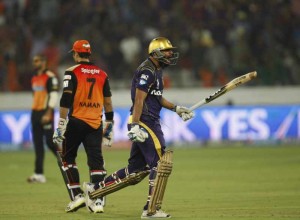 Electing to bat, Sunrisers were restricted to 142 for eight after Australia’s David Warner (34 off 18 balls) had threatened to take the game away from Kolkata.

The Knight Riders didn’t have it all their way and made heavy weather of the chase, scoring 146 for three in 19.4 overs.

Yusuf Pathan’s 41 off 28 balls and Ryan ten Doeschate (25 not out) combined brilliantly to add 42 runs off just 26 balls.

The win took Kolkata to 12 points from 11 matches, two points behind Rajasthan Royals in third place and two points ahead of Royal Challengers Bangalore in fifth.

With eight points, Sunrisers continue to occupy sixth place but their chances of them making it to the playoffs are all virtually over.

Kolkata’s run chase got off on the wrong foot with captain Gautam Gambhir (6) dismissed by South Africa’s premier pacer, Dale Steyn, in the second over.

Robin Uthappa (40) however continued his good scoring form and strung together a 51-run stand with Manish Pandey (35).

Pandey and Pathan added another 45 runs for the third wicket. Runs, however, came at a slow rate leaving Pathan and ten Doeschate requiring 30 runs off the final three overs.

Bhuvneshwar Kumar’s 18th over was plundered for 14 runs, taking Kolkata closer to the target.

Steyn bowled brilliantly to restrict Pathan and ten Doeschate to just six runs in the penultimate over but the former Netherlands player smashed a six and four off the final over to give Kolkata the win with two balls to spare.

Earlier, Aaron Finch (8) failed with the bat once again, falling victim to Umesh Yadav in the second over.

Shikhar Dhawan (19), who was replaced by Darren Sammy as the captain, looked to have recaptured form but Sunil Narine ended his innings prematurely.

Sunrisers, then lost wickets at regular intervals and were reduced to 98 for four in the 13th over.

Warner threatened for a while but got out with still six overs to go, leaving newly appointed skipper Sammy and the lower middle-order a lot to do.

Sammy had a disastrous stay at the crease, scoring seven runs off 16 balls. Irfan Pathan struck 23 off 19 balls in the end to take his team to a respectable total.