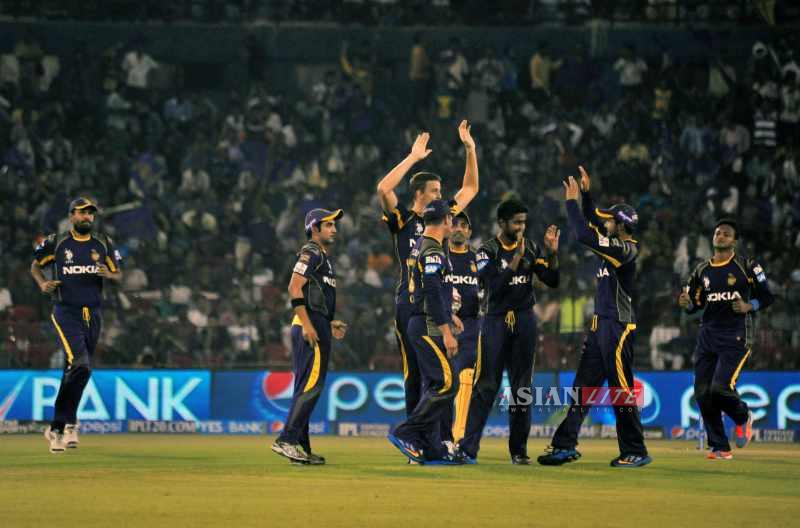 Kolkata Knight Riders came up with an all-round show to romp into the final with a clinical 28-run decimation of Kings XI Punjab in qualifier 1 of the Indian Premier League here Wednesday.

Put in to bat, the Knights posted a challenging 163/8, and then restricted the Kings to 135/8 before a packed Eden Gardens here to reach their second final in three years. They had won the tourney in 2012.

The hosts rode on useful contributions by their mainline batsmen, and overcame the hiccups of losing wickets at crucial moments to finish on the right note by plundering 49 runs in the last four overs.

The Kings’ reply started on the wrong note with the big wicket of Virender Sehwag (2) falling in the very second over. The seasoned campaigner punched a short of length delivery of Umesh Yadav, but finished in the hands of cover fielder Shakib-al Hasan.

The rain, which had led to a 25-minute stoppage during the Knights’ knock, resumed in the fourth over of Kings’ essay. The ground staff rushed in with the covers but the umpires thought otherwise and continued the game.

The visitors, then 17/1 in 3.2 overs, needed to reach 37 for the par score within five overs. The realisation dawned on Vohra, who hit two consecutive sixes of Shakib as the fifth over produced 15 runs, taking the Kings to 39/1.

Vohra got another shot out of the ground over long on but pacer Morne Morkel got the batsman out of the way three balls later with Yadav catching a miscued pull deep at mid on. The visitors were 45/2.

The in-form Glenn Maxwell (6) did not last long, but Saha – playing on his home ground – kept the scoreboard moving with singles, besides a big six off Piyush Chawla.

But facing a daunting asking rate, it was not enough for the Kings as the asking rate continued to climb putting the visitors under pressure.

Morkel again struck in the 12th over as a desperate Saha endeavoured to step up the scoring rate but scooped to Yadav. The Kings sensed danger at 80/4.

From then on, the Knights established firm control as David Miller (8), Akshar Patel (2) departed in quick succession.

Yadav finished with enviable figures of 3/13 to bag the man of the match award. Morkel got two.

Earlier, the Knights rode on the brilliance of top scorer Robin Uthappa (42;30b 4×4 2×6) to post a challenging total as the other batsmen also chipped in with useful contributions.

After losing skipper Gautam Gambhir (1) early on, Uthappa stitched a 65-run partnership with Manish Pandey (21) to build a solid platform. The duo though, departed in the ninth over with the host in a spot of bother with 67/3.

Uthappa who has so far scored 655 runs from 15 outings, has now the highest aggregate by an Indian in an IPL season overcoming Virat Kohli’s 634 in 2012.

Shakib (18) and Yusuf Pathan (20) made useful contributions before being dismissed on successive balls.

Resuming the match after a 25 minute stoppage due to rain, the Knights went for the slog hitting some lusty boundaries.

A late charge led by Ryan Doeschate (17), Surya Kumar Yadav (20) and an unbeaten 9 ball 17 from Piyush Chawla saw KKR reach the challenging score as they plundered 49 runs in the last four overs.

For the visitors, Karanveer (3/40) was the most successful bowler while Patel 2/11 and Mitchell Johnson 2/31 were the other wicket takers.