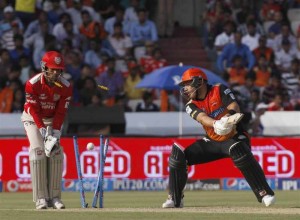 Chasing 206 from 20 overs, the Punjab outfit achieved their goal with 1.2 overs to spare.

An unbeaten 79 off 36 balls from Naman Ojha powered the Sunrisers to more than a challenging total. Ojha was given excellent support – first by captain Shikhar Dhawan, who scored 45 off 37 balls, and then by Australia’s David Warner, who smashed 44 off just 23 balls.

Wicketkeeper-batsman Ojha smashed his highest score and the first half-century of the seventh edition of the IPL, hammering four boundaries and an incredible seven sixes during his innings.

Rishi Dhawan bagged two wickets while Shivam Sharma and Sandeep Sharma chipped in with one wicket apiece for the Kings XI.

In reply, though Kings XI lost opener Virender Sehwag (4) early, opener Manan Vohra (47) and wicketkeeper-batsman Wriddhiman Saha (54) struck a fantastic 91-run partnership for the second wicket in only 41 deliveries at a run rate of 13.31. Saha was named the man of the match for his 26-ball knock which included eight fours and two sixes.

After the duo got out, explosive batsman Glenn Maxwell took the charge, hitting 43 off just 22 balls which included five sixes.

Despite Maxwell’s dismissal, the Kings XI batting ran deep and David Miller (24 not out) and skipper George Bailey (35 not out) made sure the team reached home comfortably.