An unfortunate own goal and a Lionel Messi special helped Argentina overcome debutants Bosnia-Herzegovina 2-1 in their opening Group F match of the FIFA World Cup at the Maracana stadium here Sunday. 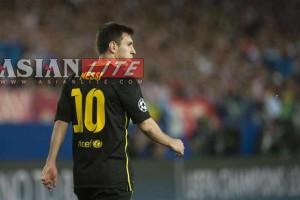 It took a moment of Messi magic to win the game for Argentina, but the South Americans will know they will have to improve if they are going to return to the Maracana for the final next month.

Nevertheless, it’s three points for the two-time winners who get off to a winning start in Group F. For Bosnia they leave Rio with their heads held high after an impressive World Cup debut.

Messi played a hand in the first goal as well as he whipped in a free-kick which was flicked on by Marcos Rojo to the back post.

Kolasinac failed to readjust his feet in time and the ball ricocheted his back leg into his own net.

It was also the third own goal in this year’s World Cup finals.

The first one was scored by Brazilian defender Marcelo in the tournament’s opener against Croatia and the second by Honduras goalkeeper in the match against France earlier Sunday.

Ironically, Marcelo’s own goal was the first goal of this World Cup.

Argentina paid more attention on defence in the first half and the attacking relied just on Messi, Sergio Aguero and Angel Di Maria.

In the second half, Argentina showed more attacking flair but found a stubborn Bosnia-Herzegovina defence hard to break down.

After eight years and 623 minutes of game time, Messi finally scored only his second goal in World Cup finals with the first being against Serbia in 2006.

The forward picked up the ball 25 yards out, and after showing some acceleration to beat a defender he rifled the ball into the bottom corner off the post.

To their credit, Bosnia refused to give up and went hell for leather.

Their attacking formation paid off in the 85th minute when substitute Vedad Ibisevic ran on to a through ball inside the box and slided the ball in between the legs of Argentine keeper Romero, with the ball just creeping over the goal-line.

The two sides have met once in a friendly in the United States last November when Argentina won 2-0.