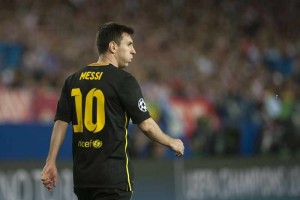 FC Barcelona confirmed they have reached an agreement with Lionel Messi to extend the striker’s contract.

“FC Barcelona has reached an agreement to adjust the terms in the contract binding Lionel Messi to the club as a professional first team player. The revised and updated contract will be signed over the next few days,” read a message on the Barcelona website Friday.

Although the club has not yet released any details of the deal, it is expected that the new contract will make Messi the best paid player in the world with a salary of around 20 million euros a year, more than Cristiano Ronaldo of Real Madrid.

Messi’s current deal expires in 2018 and negotiations over the new contract have been ongoing for several months although they were stopped for a short after Sandro Rosell was forced to resign as club president in January.

Despite not celebrating his 27th birthday until June, Messi has played more games for the Barcelona first team than any other foreigner (424) and is the club’s all-time highest goalscorer (354).

The Argentine joined Barcelona as a 13-year-old broke into the first team when he was just 16 in the 2004-05 season. He has won 21 major titles, including six La Liga, three Champions League, two Copa del Rey, two Club World Cups, two European Supercups and six Spanish Supercups.

He will hope to add another title late Saturday when Barcelona entertain Atletico Madrid, knowing a win will see them retain the La Liga title.