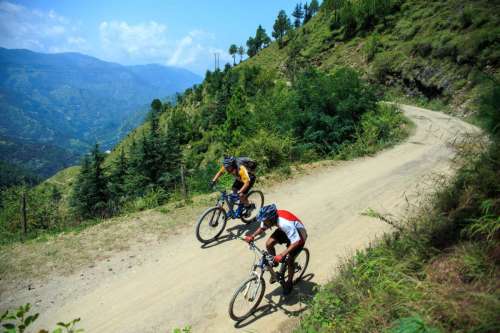 Ace rallyist Suresh Rana, who captured the Maruti Suzuki Raid-de-Himalaya, one of the world’s toughest off-road motor rallies, nine times in the four-wheeler Xtreme category, aims to capture the tenth title this year in the 16th edition beginning next month.

“This time retaining the title for a record tenth time seems as tough as climbing a mountain peak. Like every year, this time too I am gearing myself up for the rally,” Rana said.

In the 16 years of the Raid, the defending champion of Raid-de-Himalaya won the race five times on the trot till 2008.

“This time my focus will be more on preserving the vehicle. In the last Maruti Suzuki Desert Storm the vehicle suffered clutch failure just in the first stage,” said Rana, 41, popularly known as the ‘king of racers’.

He’s participating in the Raid for the 12th time and Grand Vitara for Team Maruti is his favourite machine.

His navigator this year is Parminder Thakur of Shimla.

For this man, who is born and brought up in the mountains, no terrain in cold or hot desert is tough. “The toughest terrain is that in which you fail to protect your vehicle from certain break down.”

“All the rallies really test one’s nerves, patience and determination.”

Rana, who runs a motor garage near Manali in Himachal Pradesh, said: “Surviving in extreme cold with low oxygen plus treacherous terrain in high mountain passes is really challenging for a motorist.”

Rally Adventure follows the TSD (Time-Speed-Distance) format and is considered to be the safer option for rallying, while the Xtreme category is an all-out speed category and a high-risk sport.

The highest speed Rana recorded at the Raid 2013 was 156 km an hour, say rally organisers.

“Out of the 15 competitive stages, 72-km Gramphu-Losar and 52-km Debring-Daat stretches will be the challenging ones,” Manjeev Bhalla, vice-president of the Himalayan Motorsport Association (HMA), the Shimla-based club that annually organises the rally, told IANS.

“For the organisers these stages are interesting because they offer a variety of hazards. For rallyists, these are challenging because they are unable to decide how fast they can go on a stretch that comprises 100 percent dirt and rough. Even chances of vehicle breakdown are more there,” added Bhalla who is the clerk of the course in the Xtreme category.

The rally will cover about 1,650 km through harsh and difficult terrain at 4,000m above sea level and will cross 11 mountain passes of Himachal Pradesh in six days. The Raid would pass through some areas where temperature dips below 20 degrees Celsius.

After flag off from Shimla Oct 4, the Raid will pass through Manali, Kunzum Pass, Kaza, Komik, Dhankar, Gramphoo, Darcha, Sarchu, Debring, Daat and

Keylong and will finally culminate in Manali Oct 10.

The prize distribution ceremony will be held in Manali Oct 11.

Raid de Himalaya is one of the two Indian motorsport events listed on the off-road rally calendar of international automobile and motorbike federations — FIA and FIM. Only 12 international motoring events worldwide are listed in this calendar.