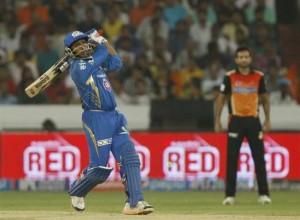 Electing to bat, Australian duo Aaron Finch (62) and David Warner (55 not out) powered the Sunrisers to 157 for three in 20 overs.

West Indies’ Simmons and Rayudu combined brilliantly upfront bringing about the 130-run partnership in just 87 balls as Mumbai eased to 160 for three in 18.4 overs.

Mumbai’s chase, though, started on a disastrous note with opener C.M. Gautam (1) being dismissed in the second over.

Simmons and Rayudu however snatched the initiative right back in Mumbai’s favour with some aggressive batting.

Captain Rohit Sharma (14 not out) along with Kieron Pollard (6 not out) added the finishing touches to give Mumbai the crucial win that took them to six points.

Earlier, Finch and captain Shikhar Dhawan (11) got Hyderabad off to a flyer with a 31-run opening stand off 30 balls.

Dhawan, though, once again failed to make use of a good start and threw his wicket away.

Lokesh Rahul (10), who has impressed in the tournament, was unlucky to be run out. That set the stage for Australia’s explosive batsman, Warner, who announced his return to form with a blistering 55 off just 31 balls.

Finch, who was the more sedate of the two, and his compatriot strung together 63 runs for the third wicket.

Warner finished the innings off in style, smashing 18 runs of Pollard’s final over.