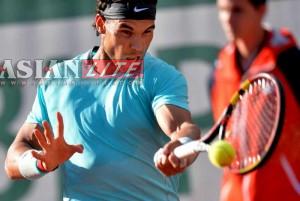 Nadal only conceded 10 points on his serves and brushed Murray aside in one hour and 40 minutes.

“I think I played very well with my forehand. I think it was important to serve the way that I served today,” said Nadal after the match.

“It’s true that for a player like Andy – he’s a big returner – that he made more mistakes than usual on the return,” he added.

Djokovic, who is trying to become the eighth man in history to win the career Grand Slam, overcame a midway fatigue to scrape past Gulbis.

The Serb eased through the first two sets against Gulbis and did an excellent job of subduing the Latvian’s power, but faltered in the third set.

He fought off break points in the second and sixth games before succumbing in the eighth when Gulbis fired a backhand winner down the line.

“The first two sets went well,” said Djokovic. “Then suddenly midway through the third set I started to feel physically fatigued a little bit, and you could feel that.”

“You could see that both me and him, we struggled on the court. It happens, you know. The important thing for me is that I realised what’s going on. It’s nothing serious,” he said.

Djokovic regrouped himself and moved 2-0 up when Gulbis buried a forehand in the net, and from there he did look back.

Peng Shuai of China partnered with Su-Wei Hsieh of Chinese Taipei to beat Spanish duo Garbine Muguruza and Suarez Navarro 6-2, 5-7, 6-2 in the women’s double semifinal, and will in the final face the Italian pair Sara Errani and Roberta Vinci, who beat Lucie Hradecka/Michaella Krajicek 6-2, 6-1.