Cristiano Ronaldo Sunday removed the doubts on whether he would be able to play Portugal’s World Cup opener against Germany although he admitted he can still feel some pain. 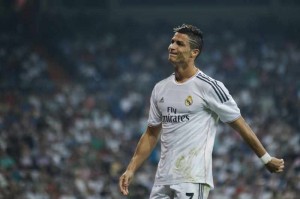 “I am here because I want to help my national team. If I am not ready, if I am not feeling well, I would be the first to tell the coach I do not want to play,” the Portugal’s talisman said in a pre-match conference at the Fonte Nova Arena in Salvador, Xinhua reported.

The 29-year-old forward ended his training session early Thursday and limped off the pitch with an ice bag on his knee. Reports speculated that the FIFA Player of the Year could be sidelined for Monday’s match between Portugal and Germany.

“As the coach has said many times, the first thing he cares is the health of the players. If I feel anything, if I feel any injury which I am sure I was not feeling, I will be the first to say as I know my career will still last for a few years,” Ronaldo said.

“I will never risk my career for one match or for the World Cup. It is the most important thing for me. It should be ‘I’ coming first and then football.”

Although Ronaldo labelled the suspicion as “something silly”, he did admit he can still feel some pain right now.

“I have been practising for several days. That is because I have been feeling well. Obviously I would like to not have any pain, but that is impossible,” he said.

“Since I started playing I do not have any day which I do not feel any pain or what so ever. This is just a part of it.”

Ronaldo insisted he is ready for a great World Cup and both his team and himself are highly motivated.

“What I want most is to be the same person in my club when in the national team, trying to give all my best for my team to win. And that is what I will try to do tomorrow and the whole World Cup,” he added.