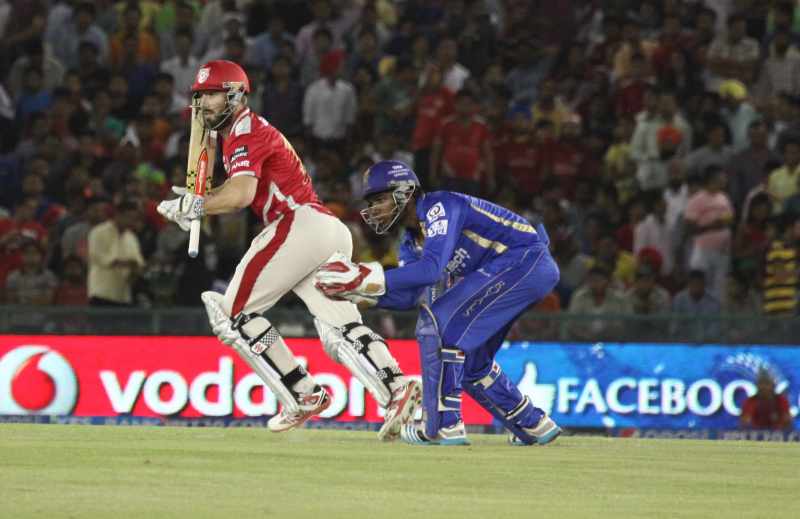 Rajasthan Royals’ hope of making it to the play-offs suffered a set-back as they went down to Kings XI Punjab by 16 runs at the PCA Stadium here Friday.

Chasing a target of 180, Rajasthan Royals managed 163 for eight in 20 overs after a late onslaught by James Faulkner (35 not out) and Brad Hodge (31).

Rajasthan Royals’ loss opened up the race for the fourth spot and their next match against defending champions Mumbai Indians would be a knock-out match for both the teams.

What baffled many was Rajasthan Royals skipper Shane Watson’s decision to send Hodge and Faulkner late in the batting line-up while chasing a big total.

They were pretty much on course thanks to brisk knocks from Ajinkya Rahane (23) and Sanju Samson (30).

But the dismissal of Rahane, Watson and Stuart Binny (7) in quick sucesssions saw Rajasthan Royals slump from a comfortable 56/1 to 70/4.

Pacer Rishi Dhawan (2/25) uprooted the stumps of Rahane and Watson in similar fashion in consecutive deliveries but missed out on a hat-trick.

Leg-spinner Karanveer Singh (2/16) put further brakes on the scoring as he removed Binny and Samson in his back-to-back overs that left Rajasthan Royals at 83/5 in the 14th over.

Left-arm spinner Akshar Patel (3/24) then rattled the middle-order by picking up the wickets of Rahul Tewatia (16), Hodge and Faulkner.

Hodge and Faulkner’s cameo got Rajasthan Royals close but it came too late in the match. Hodge struck two fours and two sixes in his 18-ball knock while Faulkner’s unbeaten 13-ball stay had one four and four sixes.

The top order fired in unision and it was opening batsman Virender Sehwag, who gave a quick start with an eight-ball 18.