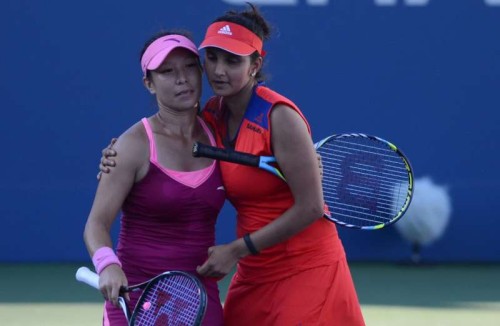 Wednesday was the first time the Indian tennis star reached the final of the US Open in mixed doubles.

Sania Tuesday had already equalled her best performance in the women’s doubles here when she reached the semi-finals with Zimbabwean partner Cara Black.

The top-seeded Indian-Brazilian pair, though, didn’t have it easy, recording a 7-5, 4-6, 10-7 super tie-break win over the British-Chinese Taipei team.

After struggling to a 7-5 win in the first set, Sania and Soares were shocked in the second as the top team failed to convert their break point opportunities.

The super tie-break was also a close fought affair and thanks to their six winnners, Sania and Soares ended the unseeded team’s resisitance after an hour and a half battle.

In the women’s doubles semis, Sania and Cara will face Martina Hingis of Switzerland and Flavia Pennetta of Italy Thursday.