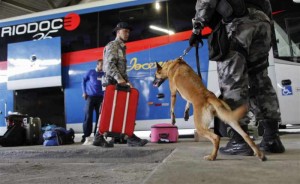 Brazilian authorities ramped-up the security for the FIFA football world cup due this year to ensure fans’ safety as part of largest security setup ever deployed in a world cup event.

Earlier this year, the Brazilian government announced it will invest 800 million dollars in the largest ever security operation at a World Cup.

More than 170,000 police, military and secret service personnel will be on guard in Brazil’s 12 World Cup host cities.

In Rio, 20,000 security personnel will be deployed during the June 12-July 13 tournament in Brazil’s second-largest city, government officials said.

Police will comprise half of the total security force, with the remainder made up of municipal guards, highway police, national armed forces, federal police and emergency service officers.

“It will be without doubt the largest security operation in Rio de Janeiro,” Xinhua quoted the government’s major events security secretary Roberto Alzir as saying.

Four of the 32 teams who will play in the world cup have chosen Rio or its surrounding area for their tournament headquarters.

England and the Netherlands will stay in the city’s metropolitan area while Brazil and Italy will be based in Teresopolis and Mangaratiba respectively.

In addition to the security personnel, aviation authorities have issued a no-fly zone over the Maracana stadium one hour before and three hours after each match.

For the final, the ban will extend to three hours before kick off and fours after the final whistle.

The no-fly zone prohibits all air traffic within a seven km radius of the stadium.