The young Romanian gave a tough fight to Sharapova in a battle that lasted three hours and two minutes at the Philippe Chatrier Court. 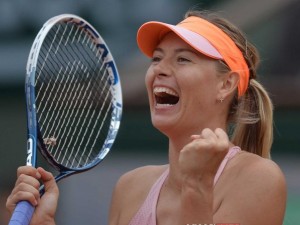 But Sharapova won 6-4, 6-7(5), 6-4 in an epic battle — the first three-set final since Jennifer Capriati came back to defeat Kim Clijsters 13 years ago.

The first set was a humdinger, filled with long pummelling rallies. Time and again, Sharapova fired strokes that would be winners against most rivals, only for Halep to find some way to get it back.

Losing the first set to Sharapova at the French Open is a fast way to create a mountain to climb. And Halep was already facing an opponent she had never defeated, with her most recent loss at Madrid last month.

It got worse for Halep — she double-faulted to give break point at the start of the second, and then sent the ball way wide for 0-2. But to the thrill of the crowd, she put it back on service next game, and from then until 4-4 the Romanian would not be shaken.

Then Halep brought up break point at the end of an epic 20-stroke rally which Sharapova should have closed out but instead ended with an error; moments later, a cross-court forehand landed out and Halep had broken for 5-4.

When the net cord gave the break back, it should have been a hammer blow. Instead, Halep roared back for 6-5 — and then allowed Sharapova to take it in to the breaker as the match passed the two-hour mark.

Halep was flagging at the start of the tie-break and Sharapova seemed to be edging away, only to make three unforced errors to take it to 5-6. Halep’s return on set point was too good and the match was locked at a set apiece.

Sharapova took a lengthy comfort break. As the players continued to trade breaks on her return, the Russian took so long to deliver a service that umpire Kader Nouni gave her a time violation warning.

Halep came up with the first hold in seven games, with Sharapova following suit, before they traded breaks again mid-set. The clock was approaching three hours as Sharapova finally took command, sprinting for a forehand winner to break for 5-4. This time she would not be denied, holding to love, and sinking to her knees.