Holders Spain were among three former World Cup winners to arrive in Brazil ahead of football’s showpiece tournament. 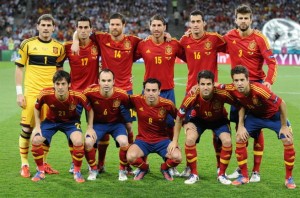 Vicente del Bosque’s side Sunday arrived to a low-key welcome in the southern city of Curitiba after a direct flight from Washington following their 2-0 friendly victory over El Salvador Saturday.

Earlier, England disembarked in Rio de Janeiro while Germany touched down at Santa Cruz Cabralia in the northeastern state of Bahia.

And he declined to compare Luiz Scolari’s team with the German outfit that hosted the 2006 tournament and were knocked out by Italy in the semifinals.

“We were carried through the whole tournament on a wave of enthusiasm,” Low said in an interview published Sunday by FIFA.com.

“The situation’s different for Brazil though, because they are everyone’s favorites to win the title. Back then we gave everyone a pleasant surprise and exceeded all expectations. The best Brazil can do is live up to what’s expected of them.”