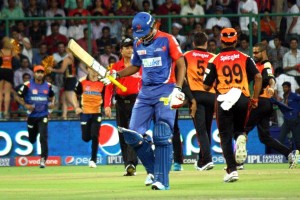 Delhi’s fourth consecutive loss means they are all but out of contention for the play-off spot while the win took Hyderabad (eight points) to fourth in the table, two points ahead of Kolkata Knight Riders in fifth.

After restricting the Daredevils to 143 for seven in 20 overs, the Sunrisers’ innings was blighted by rain interruptions.

Their target was cut to 117 in 15 overs under the D/L method, when light showers stopped play for the second time in the match.

The target was further revised to 97 in 12 overs after rain interrupted proceedings for the third time.

Sunrisers were 11 for one in 1.1 overs when the skies opened.

At 17 for one in two overs, the rain once again came, interrupting the game for the fourth time.

Under the final revised target, Sunrisers needed 43 from five overs and they scored 44 for two in 4.2 overs.

Finch (4) was castled by Rahul Shukla, giving Delhi a ray of hope. But a streaky Warner boundary and two sixes from Naman Ojha (13 not out) took Sunrisers over the line with four balls to spare.

Earlier, put into bat, Delhi changed things around with their top order, dropping Murali Vijay but that seem to have no effect on South African batsman Quinton de Kock (7), who once again failed.

Skipper Kevin Pietersen, who promoted himself to opening the batting, struggled early on but Karn Sharma’s fifth over paved way for the Englishman to return to his blistering self.

The former England captain smashed the leg spinner for 14 runs and then added to Sunriser’s woes by plundering Moises Henriques for 15 runs in the very next over.

However, Amit Mishra put an end to Pietersen’s marauding innings, picking up his 100th wicket in the IPL.

Delhi were motoring at 103 for three in 13.1 overs before the rain gods came crashing down.

The hosts seemed to lose all momentum after returning. They were 121 for three in the 15th over and managed just 22 runs in the last five, losing four wickets.