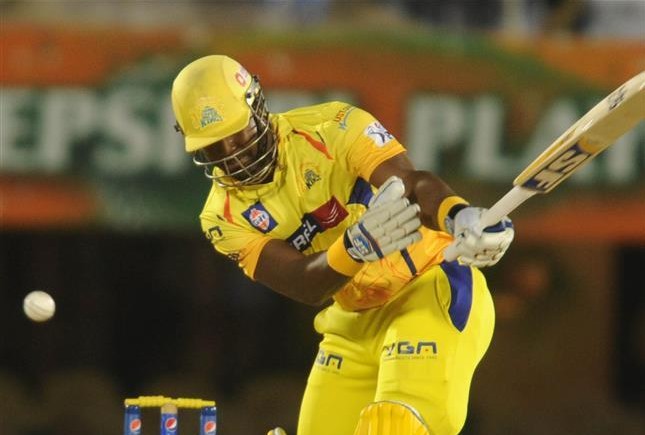 It was a clinical show by Chennai Super Kings at the Brabourne Stadium here Wednesday night after their skipper Mahendra Singh Dhoni opted to field.

A fine 44-ball 67 by Lendl Simmons set-up Mumbai Indians well for a big total as they were cruising well at 143/2 in the 17th over. But then they suffered a batting collapse losing six wickets for 30 runs and managed to put up a decent score of 173 for eight in 20 overs.

Super Kings achieved the target easily, scoring 176 for three with eight balls to spare after Suresh Raina remained unbeaten on 54 and David Hussey on 40.

It were the openers Dwayne Smith (24) and Faf du Plesis (35), who set the foundation of the chase with their quickfire 60-run stand. Du Plesis was the most aggressive of the two and slammed five fours and a six in his 20-ball knock.

Double strikes by veteran off-spinner Harbhajan Singh, who removed both the openers, pegged back Super Kings at 64/2.

Brendan McCullum (14) also entertained briefly before he was stumped by Aditya Tare of Pragyan Ojha.

Raina and David then placed their innings well to take the team home safely. Raina got down to the business of scoring boundaries with ease and knew when to accelerate. A A

The duo added 89-runs for the unfinished four-wicket stand and took the team home safely. Raina struck four fours and two sixes in his 33-ball knock while David’s 29-ball stay was studded with two fours and three sixes.