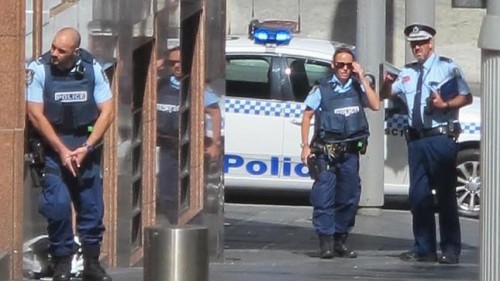 A gunman took over 30 people hostage at a busy cafe located not far from the Indian consulate in this Australian city.

The hostages were seen standing with their hands up at the windows of the Lindt Chocolate Cafe in Martin Place. There was also a black and white flag, believed to be a jihadi flag, being held up in a window, Xinhua reported.

Five hostages, including two female workers, Monday escaped to safety from a cafe where over 30 people are being held hostage by gunman in this Australian city.

Five hostages have made it out of the cafe at Martin Place, Deputy Commissioner Catherine Burn was quoted as saying by Sydney Morning Herald.

Three hostages managed to flee, police said and added that nobody was harmed in the initial hours.

Thousands of workers across the city have been sent home early and some of the city’s major buildings including the Opera House, the State Library, Channel Seven, the New South Wales parliamentary executive offices, the NSW Supreme Court’s criminal courts, the Downing Centre and several city legal chambers were evacuated.

The Indian consulate is located less than a kilometre away.

The National Security Committee of the Cabinet has also been convened for briefings on the situation.

The prime minister described it as a “deeply concerning incident, but all Australians should be reassured that our law enforcement and security agencies are well trained and equipped and are responding in a thorough and professional manner”.

“The incident in Sydney is disturbing. Such acts are inhuman and deeply unfortunate. I pray for everyone’s safety,” the prime minister said in a statement.

New South Wales (NSW) police commissioner Andrew Scipione said police were yet to make contact with the the one or more offenders who laid seige at the Lindt Chocolat Cafe, the Sydney Morning Herald reported.

“We are still determining what it is that may well be the motivation. We are not in a position to determine where the individual is from,” the paper quoted Scipione as saying.