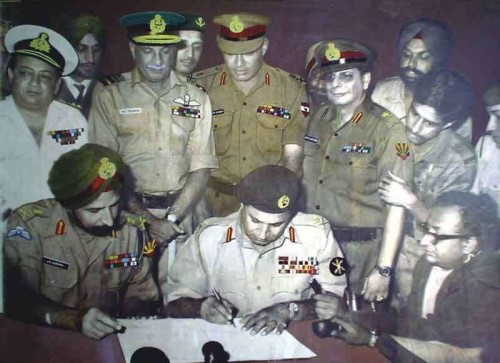 The singers had just finished their patriotic numbers when a shrill whistle rent the air.

A surge of men piled on to the stage where the Sectors Commanders Forum, an organisation of those who fought the 1971 liberation war against Pakistan, were celebrating the Victory Day that ended in the birth of Bangladesh.

The anchor conducting the celebrations Tuesday evening broke the suspense soon after.

The Sikh turbaned man was a lookalike of India’s former eastern army commander Lt. General Jagjit Singh Aurora, the clean shaven one Lt. General A.A.K. Niazi who Dec 16, 1971 surrendered with his army in East Pakistan to a joint command of Indian army and Bengali freedom fighters at the end of a bloody nine month civil war.

The two proceeded to sign and accept the Instrument of Surrender as the real Aurora and Niazi had done 43 years ago on this day – and the ‘ceremony’ was organised at the very spot where the real surrender ceremony had taken place in Suhrawardy Park, formerly Ramna race course, where ‘Father of the Nation’ Sheikh Mujibur Rahman had given the call for independence March 7, 1971.

What followed was more dramatic.

More than 30 top freedom fighters led by former Bangladesh army chiefs, Generals K.M. Safiullah and Harun-ur-Rashid, and retired colonels Abu Osman Choudhury and Shams-ul-Alam, proceeded to hand over the Bangladesh flag to as many youngmen and women.

“We are passing over the baton to the younger generation who have not seen the Liberation War but value our independence as much as we who fought do. We want them to uphold the values of secular Bengali nationalism that led us to fight Pakistan,” said freedom fighter and writer Haroon Habib, who is secretary general of the Sectors Commanders Forum.

“We have full faith in Bangladesh’s GenNext. Our country will never tolerate regressive fundamentalism that we see surfacing in some parts of the world,” he said as ten of thousands mostly young flocked to the event.

But many of these Bengali freedom fighters who fought alongside the Indian Army appeared dismayed at why India does not celebrate this Victory Day with similar fanfare.

“It was as much our victory as India’s. We died in tens of thousands but several thousand Indian soldiers also died for our freedom. We expect India to jointly celebrate this day with us,” said former freedom fighter Mahibul Islam Edu.

India’s eastern army does observe this Victory Day and brings over some Bangladesh freedom fighters to Kolkata’s Fort William.

“But civilians are hardly involved. So few even in Calcutta appear to know about India’s biggest military victory,” said Shams-ul-Alam, who was implicated with Sheikh Mujib in the famous Agartala Conspiracy case in the 1960s for alleged conspiracy to break up Pakistan.

The trial in that case catapulted Sheikh Mujib as the undisputed Bengali leader in what was then East Pakistan.

In a recent conference held by ‘Asian Confluence’ in Shillong, he pushed for grand India-Bangladesh celebrations Dec 16 to strengthen relations between the two neighbours by leveraging shared history.