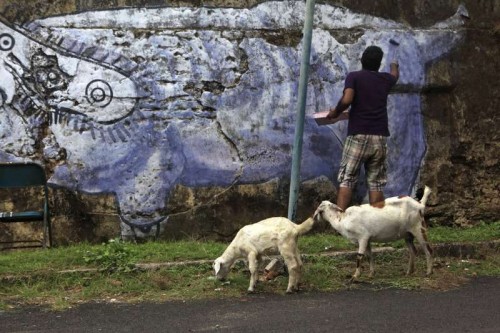 If Hollyoowd wizard Christopher Nolan’s “Interstellar” explored the idea of finding life on another planet in space, artist Jitish Kallat is redirecting many journeys between time and space through artistic impressions that would take the audience on a whirlpool of explorations during the 108-day-long Kochi-Muziris Biennale.

Spread over eight venues across this port city, the second edition of the biennale has beautifully blended various mediums – paintings, installations, videos, sculptures and films to accommodate the works of around 94 artists, national and international, and house around 100 projects at various sites.

And it is this brief that has transformed into a global artistic expression, with different perspectives of established and budding artists to view certain developments that require a concentrated view.

The historical Aspinwall House is hosting over 64 works of art that have occupied many dark sheds of the building and share a common thread of observing and exploring infinite space that poses many indefinite questions and fathoming them would be based on perceptions and the outlook one adheres to.

It is here that one would witness American modernist artist couple Charles and Ray Eames fscinating video “Power of Ten. A film essay made in 1977, it begins with an overhead image of a couple lounging before rapidly zooming out.

Every ten seconds the camera zooms out by the power of ten, moving from a one meter square view of the couple – viewed from one meter away to ten, hundred and thousand meters till it reaches an unknown space.

As the journey progresses, the earth is left behind and one enters the solar system, then the galaxy and then the Milky Way – till one reaches the end of the universe. And then the journey heads back to from the astronomical space to the inner world of the atom.

The nine-minute video highlights the power of unknown and ephemeral vulnerability of human beings.

Then there is Chinese artist Yang Zhengzhonga’s video “922 Rice Corns” which, according to Kallat, narrates the consumption, annexation and balance of resources by human kind.

This 2000 video begins with a close-up and zooms out to reveal a disc of white rice on the floor, an image reminiscent of earth. As the chicken begin to peck, a man and a woman count aloud the number of grains ingested by the male and female birds. This seemingly innocent contest soon takes on other dimensions of gender politics and debates about consumerism.

Another interesting video is by a London-based poet-philosopher Michael Stevens, who asks questions like “What If the Earth Stopped Spinning” and “What is the Speed of Dark” that draw viewers into a whirlpool of recurrent enquiries and attempts to answer a range of questions that many of us have thought about as children but have since stopped asking like “Is Anything Real?”

“One has to read in-between his work. And his work corresponds with others’ works that are displayed here,” Kallat told IANS.

It is this eclectic mix of artists and works that is bound to create synergy between dynamic art forms and visitors.

While the last-minute preparations are still underway, Kallat said that biennale has shaped up exactly the way he had thought.

“It is a dream come true. And I am surprised that the way I had certain designs in my mind, even for the catalogue, the design team too had thought on the similar lines. So a lot of synergy is there and it will definitely recreate magic and draw people towards art,” said Kallat.