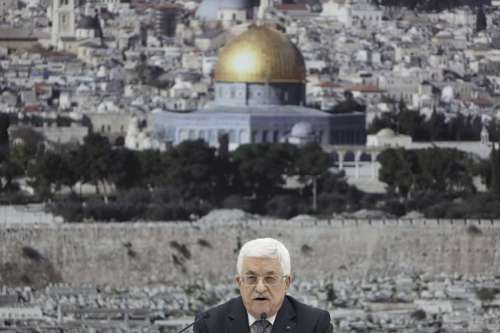 Palestinian President Mahmoud Abbas  warned that the Israeli measures in east Jerusalem and against al-Aqsa Mosque may turn the conflict in the Middle East into a religious one.

“The Palestinian people will never accept the serious Israeli measures taken against al-Aqsa Mosque and the Ibrahimi mosque in Hebron,” Abbas said in a statement to reporters in Ramallah, in response to the clashes at al-Aqsa Mosque in the old city of Jerusalem earlier Wednesday morning.

“The Israeli practices and measures are trying to turn the political conflict into religious,” Xinhua quoted Abbas as saying, while stressing that the seriousness of the consequence is well known.

He warned that the Israeli government “must pay careful attention to these measures and to the possibility of turning the conflict in the Middle East into a religious one”.

“We are in contact with Jordan and the international community and brief them on these measures. The best way I believe to stop these measures is to go to the UN Security Council and ask for ending the Israeli occupation,” he added.

Al-Aqsa Mosque is a holy place for Muslims in east Jerusalem. Though the site is located in Jerusalem, Jordan oversees the al-Aqsa Mosque and all other Muslim and Christian religious sites in East Jerusalem, which the Palestinians want as the capital of their future state.

Frequent visits by Israeli Jews to the site provoke Palestinian Muslims and often lead to violent clashes with Israeli soldiers guarding the compound.

Earlier this year, a right-wing Israeli, Moshe Feiglin, entered the al-Aqsa compound, provoking many Palestinians, as his visit came shortly after members of the Israeli parliament called for a session to discuss imposing Israel’s sovereignty over the compound.

Controversies over the al-Aqsa compound have sparked violent clashes in the past. A visit to the compound by Israeli leader Ariel Sharon in 2000 was widely seen as a trigger for the second Palestinian Intifada, or uprising, which engulfed Israel and the Palestinian territories in bloody and deadly violence for years.