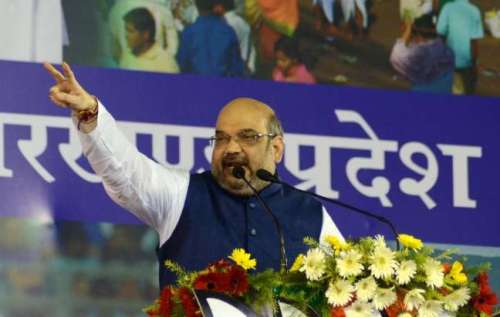 Uttar Pradesh Police Wednesday filed a chargesheet against BJP president Amit Shah in Muzaffarnagar over a speech delivered by him during the Lok Sabha election campaign, officials said.

The speech was reportedly delivered by the Bharatiya Janata Party chief April 4.

He was then booked by the local police for breaching prohibitory orders under section 144. He was at that time in charge of the BJP poll campaign in Uttar Pradesh.

Under these sections, Shah has been accused of using foul words against a community and of trying to disrupt communal harmony, threatening the state and the people.

If the charges are proved to be true, the BJP president could face a prison term of three years.

All the sections are non-bailable, an official said, and Shah will have to present himself before a court.

Reacting to the chargesheet, state BJP spokesman Vijay Bahadur Pathak said the initial charges levelled against Shah were responded to by the BJP in May as sought by the Election Commission.

“In the wake of the new developments, the party would contest the charges legally,” he told IANS.

Pathak accused the ruling Samajwadi Party in Uttar Pradesh of indulging in a political vendetta.