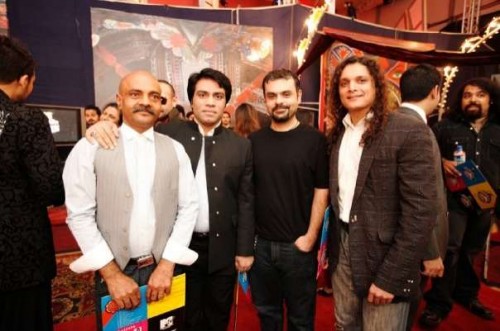 Lahore-based musician Mekaal Hasan has done something unique by adding Indian artistes to his band last year. Now out with a new album “Andholan”, aptly named, he says it’s more adventurous in its writing style and believes that the “unique band” has best talent from his homeland and India.

Popular for Sufi rock music, the band was formed in 2001 and has seen a change in its members since then. With Hasan taking on the role of lead guitarist and fellow Pakistani Mohammad Ahsan Papu on flute, the remaining members are Indians — vocalist Sharmistha Chatterjee, bassist Sheldon D’Silva and drummer Gino Banks.

Hasan met Banks and D’Silva in 2007 in Mumbai. They became friends and he would hear them play on his visits to India.

“I would marvel at their talent and eventually Gino and I started discussing how we could carry on the idea of the band with an Indian contingent involved.

“Thus started our journey of how to make this rather unique band, which I believe has the best contemporary talent from both sides playing as one unit,” Hasan told IANS in an email interaction from Lahore.

“I have been touring in India for over a decade and I felt that there was so much which we shared in common through our music, our poetry, our culture and that there was every reason to bring in the music to be played with the finest musicians on the Indian circuit,” he added.

He believes that the incarnation of the band is its finest and reflects the wide range of sound and dynamics.

And the response has been “overwhelming”.

“I think both countries understand that our true strengths are our people and their ideas, our collective ability to innovate and overcome even under trying circumstances.

“In Pakistan, many fellow musicians have called or messaged and been all praises for the band’s invigorated sound and presentation,” he said.

Likewise, he says, friends and peers in the Indian music industry have embraced the band with open arms.

“I am truly moved by how nice everyone has been and how much respect and love they have all shown. At the end of the day, if we play music of value, we also appreciate and yearn for the love and respect of our peers. For me, such gestures of warmth say so much about the love we all share for quality music and musicians,” he said.

Talking about “Andholan”, he said: ” ‘Andholan’ as a record features a progressive writing style that I think it came off well. The challenge now is to make it sound even better live!”

They plan to perform internationally and in India as well.

“I believe we have some engagements coming up in this season which will be taking us to various cities in India,” shared Hasan, who also produces and engineers records and singles at his Digital Fidelity Studios.

He is also open to Bollywood projects.

“If there is something which my music can compliment or work with, sure. But my primary intent is to play my music with this band,” said the 41-year-old.