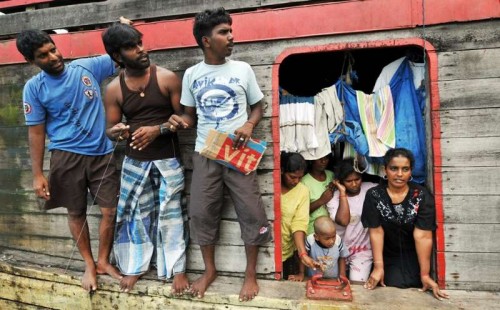 Amnesty International, the Human Rights Law Centre and the Human Rights Watch made the appeal in response to the Nov 29 decision of Australian authorities to turn over to Sri Lanka a boat carrying 37 asylum seekers.

Human Rights Watch has previously documented the Sri Lankan authorities’ use of torture and rape against Tamils in detention, including those returned as failed asylum seekers from countries such as Australia.

Foreign governments should publicly call on the Sri Lankan authorities to immediately release any of the 37 returnees arbitrarily detained, Human Rights Watch said.

“The flawed procedures, including a handful of questions conducted at sea, offer only minimal opportunity to highlight torture, rape or other persecution.”

Australian authorities handed the asylum seekers’ boat directly to the Sri Lankan navy Nov 29, after only cursory screening at sea.

Only one asylum seeker on board was accepted as an asylum seeker, and was sent to Nauru for his claim to be assessed.

The government’s assessment of the plausibility of the asylum seekers’ claims, without giving them time to recover from the sea voyage and prepare their claims, or to have proper access to lawyers and review, was unfair and endangered peoples’ lives, the three groups said.

Australian authorities had originally stopped the vessel Nov 15, and prevented it from reaching Indonesian waters.

Australia violated its obligations under international law by sending the 37 asylum seekers back to Sri Lanka, without properly assessing their protection claims, the three groups said.